As Egypt hosts COP27, a few pioneering believers struggle to transform the region most at risk of climate change yet demonstrating the least concern.
Jayson Casper|November 14, 2022 12:30 PM 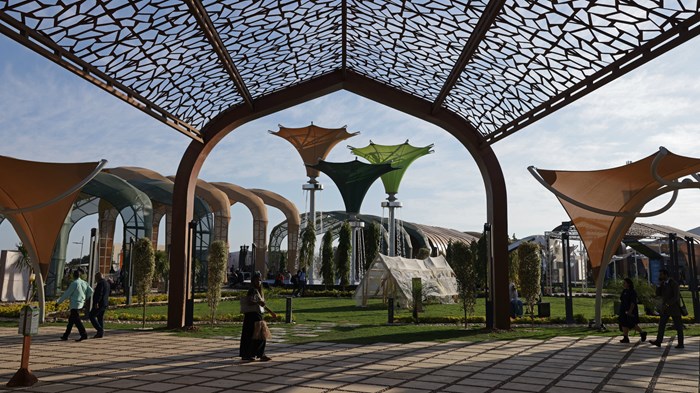 “Wisdom,” said Jesus, “is proved right by all her children” (Luke 7:35). But sometimes it takes generations to judge, as demonstrated by a new research study that threatens to tarnish the reputation of a legendary biblical paragon.

According to archaeologists at Tel Aviv University, King Solomon disregarded the environment.

Today, his spiritual descendants largely follow in his footsteps.

“We have so many working in evangelism, church planting, and leadership development,” said Michael El Daba, the Lausanne Movement’s regional director for the Middle East and North Africa (MENA). “Almost no one is working in creation care.”

Evangelicals are not alone. According to a 2021 report by the Institute for Economics and Peace, the MENA region demonstrated the least concern for climate change, including 10 of the 20 lowest-scoring nations. Only 18 percent of those surveyed in Egypt, for example, recognized it as a “very serious threat”—even as it exacerbates food insecurity.

Arab Barometer, a regional pollster, found that 68 percent of Egyptians reported running out of food before being able to get more. In half of the other MENA countries surveyed, majorities stated the same. And in 9 out of 10, majorities worried it might happen to them.

Temperatures in the region are rising twice as fast as the rest of the world, according to a study published last June in the Reviews of Geophysics. At current rates, Egypt will be nine degrees hotter by the end of the century. Iraq has already increased three degrees in the last 30 years.

Some of the damage is self-induced. The study identifies MENA as a “dominant emitter” of greenhouse gases, overtaking Europe and India. Resource extraction—as necessary as the hydrocarbons are for national economies and modern society—comes with a cost.

Just as it did with King Solomon’s mines.

Although his mines are not specifically mentioned in the Bible, copper is known to have been extracted from the Timna Valley, north of the Gulf of Aqaba in ancient Edom, a region conquered by his father David. Solomon used the minerals in the construction of the temple.

Over 4,000 acacia trees and 185,000 white broom bushes were cut down to smelt the copper, according to charcoal evidence located by the Tel Aviv researchers and published in the Scientific Reports journal. Their removal “irreversibly affected” the soil’s ability to retain moisture, sparking the desertification that continues today.

Some researchers question the association with Solomon, but contemporary abuses ensure the region grows only drier. To the north, the Jordan River’s historic discharge of 1.3 billion cubic meters of water into the Dead Sea has been reduced to as low as 20 million, according to a 2013 UN study.

A joint Israeli-Jordanian project to lessen pumping in favor of desalination aims to increase flow by up to 40 million cubic meters, but the region suffers everywhere. According to the World Resources Institute, MENA is home to 12 of the 17 most water-stressed nations in the world—and again, some of the harm is self-inflicted.

According to the World Bank, only 18 percent of wastewater in the region is reused.

“Preserving water is fundamental,” said Georges El Copti, pastor of St. Paul’s Anglican Church in Amman, Jordan. “We are part of creation, and we have to care for it.”

Copti was interviewed last month as part of the Middle East Council of Churches’ effort to promote the international “Season of Creation,” sponsored in part by the Lausanne/World Evangelical Alliance Creation Care Network (LWCCN). He spoke not only of the importance of raising awareness but also about the rainwater harvesting project at his church.

Collecting even the minimal yearly rainfall in the desert kingdom can supply 30 percent of a household’s annual water need, stated the Jordanian Ministry for Water and Irrigation. Copti’s efforts are contributing to his congregation becoming an “Eco church,” a recognition awarded by A Rocha International, an evangelical environmental organization active in 20 countries.

Since its beginning in the United Kingdom, A Rocha has led thousands of churches to commit to embedding creation care into their preaching, worship, and facility management. Spinoffs are developing in France, Ghana, New Zealand, and Switzerland—though not yet in the Middle East.

“Matter reveals God,” said Dave Bookless, director of theology at A Rocha International. “If we destroy nature, we are ruining opportunities for evangelism.”

Bookless, also a creation care catalyst for LWCCN, spoke last month in Jordan, concluding a 12-region tour to promote the Lausanne Congress conviction, ratified in 2010, that “creation care is a gospel issue within the Lordship of Christ.”

The message has been slow to circulate.

“I know all the pastors,” said a Christian leader from Algeria. “This will be a revolution.”

Requesting anonymity due to social and governmental discrimination against Kabyle converts, the 26-year pastor said he is a rare environmentalist in his country. Partly it comes from experience: His church meets outdoors in nature, denied a permit to open a building.

When authorization comes, he plans to install solar panels—and expects grumbling from the congregation. Why bother, he anticipates their objection being, when the government offers such a steep subsidy on fossil fuels? As of 2021, OPEC member Algeria is the world’s 19th-largest oil exporter and a European target for increase given the disruptions caused by the Russia–Ukraine war.

“I knew about recycling,” he said, “just not the Bible verses.”

Others in the region have gone further than reduce and reuse.

A Rocha Lebanon won acclaim for restoring the Aammiq Wetland in the Bekaa Valley. In the 1970s, authorities drained the area to combat malaria, unintentionally destroying an important transit point for north-south bird migration. The evangelical ecologists began restoration work in the early 2000s, and today the area is home to 53 species of butterflies, among other returning wildlife. And to the consternation—but not infection—of locals, even the mosquitoes are thriving again.

A current project, slowed by Lebanon’s financial crisis, is transforming a civil-war-era Syrian army landfill into a garden, complete with roses, fig trees, and a prayer labyrinth.

And outside Bethlehem, the Tent of Nations has turned the century-old Nassar family farm into an international peace and environmental center. Victim to attacks by both Jewish settlers and fellow Palestinians, the Lutheran family’s property is also claimed by the Israeli government, which uprooted many trees.

The Nassar slogan proclaims to all, “We refuse to be enemies.”

“Many evangelical churches preach, ‘Our home is in heaven,’” said Salim Munayer, founder of the Musalaha reconciliation ministry, in Jerusalem. “But as Arabs, our identity is very much connected to a geographical location, with the land itself as a fifth gospel.”

The identity is reflected even in many people’s name, he said. Many Arabic surnames end in i to connect to a traditional city or village, just as Iraqi or Yemeni denotes the national adjective.

But for those in the Holy Land, the attachments are often even stronger. And the environment is frequently one more avenue for politics within the Israeli-Palestinian conflict.

Bedouins in Galilee fear a wildlife corridor planned by the government is a disguised land grab that will limit the grazing of their livestock. And Jack Sara, general secretary of the MENA Evangelical Alliance, said that when early Zionists cleared Palestinian villages, they planted olive trees above them to hide their aggression.

He also addressed the common evangelical suspicion in spiritual terms.

“When we hear phrases like ‘creation care,’ it brings to mind someone hugging a tree,” Sara told LWCCN conference attendees. “But whenever I walk in a forest, I feel like I want to pray, don’t you?”

But none of the belonging, conflict, or meditation has been enough to rally evangelical concern for the environment, which is often seen as a “luxury topic” amid scarce resources and donor interest. Daba said that while Middle Eastern believers have largely joined social action to their verbal witness, the third pillar of the gospel—creation care—is still lacking.

He has a strategy.

“If we show them how ecology will also help the poor, they will pursue it,” he said. “We must incentivize social work to become environmental.”

A former business executive, Daba said his world once revolved around effectiveness, efficiency, and profitability. But when he became director for funding and investment for the Coptic Evangelical Organization for Social Services (CEOSS), he saw a reality once wholly alien to his church experience—shifting his concern to equality, poverty, and human rights.

It is an uphill battle to change mentalities, he said. But as his native Egypt is hosting the 27th session of the Conference of the Parties (COP27) to the UN Framework Convention on Climate Change, there has never been a better time to rally local concern—or to make it practical.

Increased salinity from the rising Mediterranean will impact the Nile River, from which Egypt draws 95 percent of its water. At current levels, crop yields will decrease 10 percent by 2050.

One Egyptian project can serve as Daba’s model.

Since its opening in 2012, the Health and Hope Oasis (HHO) in Wadi el-Natroun has provided free residential cancer care to over 10,000 children. The facility is located halfway between Cairo and Alexandria, a region which is home to some of Egypt’s most famous once-remote monasteries.

Today, the green pastures are gone—a victim of urbanization and its overreliance on precious groundwater.

“I’ve seen the effects of the loss of agricultural land in Egypt,” said 72-year-old cofounder Magda Iskander, a trained radiologist. “I am connected to the land and a peasant at heart.”

Her vision is more than ecological. To sustain the hospital’s charitable services, its 40 acres of farmland produce food for the housed families—including mangoes, dates, bread, beans, and vegetables. Water buffalo provide milk and meat, while cafés in Cairo donate used coffee grounds for fertilizer.

And whenever there are excess funds, the charity adds to its many trees.

Running a secular organization primarily serving Egypt’s Muslim majority, the lifelong Presbyterian cofounder encourages Christians to overcome their ghetto mentality. How else will society know you are different?, she asked, noting that HHO has drawn more than 1,200 cross-faith volunteers.

“Sometimes we forget what Jesus did,” said Iskander. “Create a team, and get them to share your vision.”

This charitable model may soon be increasingly in demand. According to the World Bank, by 2050, water scarcity in the Middle East will reduce regional GDP levels by up to 14 percent.

Despite his alleged environmental failing, the wisdom of Solomon remains necessary today. But as the Gospels state, now one “greater than Solomon is here.” Jesus, as head of the Middle East church, is present in all its challenges.

“Evangelicals have always been a forward-looking beacon of change in our region,” said Daba, referring to the schools and hospitals they’ve established and sustained—and even the taboo on smoking. “Now we need to lead in care for creation.”

Wiser than Solomon: Can Evangelicals Lead the ...