The increasingly political Christian satire site hasn’t been able to tweet since March, but the platform’s new owner is a fan of the Bee and free speech.
Bob Smietana - Religion News Service|November 9, 2022 09:00 AM 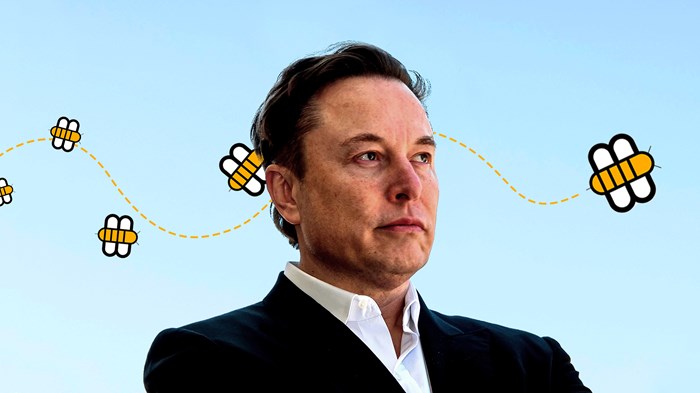 There may be a lesson in the recent troubles of the social giant Twitter.

Don’t mess with The Babylon Bee.

Started as a site to poke fun at Christian subculture, the Bee’s political satire has come to overshadow its more kindhearted Christian humor in recent years, landing the site in hot water with fact-checkers and social media gatekeepers—including Twitter.

Twitter suspended The Babylon Bee’s account on March 22, after labeling a post about transgender Biden administration official Rachel Levine as hateful content. Not long afterward, billionaire Elon Musk, a fan of the site, got a text from his former wife, Talulah Jane Riley.

“The Babylon Bee got suspension is crazy!” read the text, which was made public earlier this year. “Why has everyone become so puritanical?” Then Riley suggested Musk buy Twitter and either delete it or “make it radically free-speech.”

Musk, who recently bought Twitter for $44 billion and instituted mass layoffs, was a critic of censorship on social media long before the Bee’s troubles. But the satire site’s connection to one of the most powerful men in the world is the latest example of the Bee’s rise from a would-be pastor’s side project to a conservative powerhouse.

The Bee, modeled similarly to secular satire site The Onion, began as the brainchild of Adam Ford, who quit his day job in the mid-2010s to start creating web content. Ford’s dreams of becoming a pastor had been derailed by panic and depression, he told The Washington Post in 2016.

With the help of medication, Ford got better and began writing about faith, first for a webcomic and then in 2016 for the Bee. From the beginning, the site was a hit, especially with evangelical Christians who appreciated the good-natured jokes about the foibles of church life, which at the time caught on more than political jokes.

Among the more memorable of the site’s early jokes was headlined, “Holy Spirit Unable To Move Through Congregation As Fog Machine Breaks.”

“We barely got through our new song. It was a real train wreck,” a fictional Nashville worship leader is quoted as saying.

Other early jokes poked fun at church committees and prosperity gospel pastors like Joel Osteen, including this headline: “Joel Osteen Sails Luxury Yacht Through Flooded Houston To Pass Out Copies Of ‘Your Best Life Now.’”

Jon Glass, pastor of Cropwell Baptist Church in Pell City, Alabama, appreciated the church humor at the Bee in its early days, calling it “the kind of sarcasm that hits home and makes you think, ‘Is that what we look like?’”

Writer and former pastor Jelani Greenidge was also an early fan of the Bee’s attempts to poke fun at the weird side of evangelical culture. Those early posts, he said, helped Christians laugh at themselves.

“The best satire comes from a place of love,” said Greenidge. That love, he said, seems in short supply these days at the Bee, which Greenidge said seems too focused on skewering the politicians and progressive figures conservatives hate.

“We still do lots of church jokes—they just don’t go as viral as the other stuff,” he said, while the opportunities for satire in the daily news cycle are endless. He pointed to the site’s repeated satire of Donald Trump—a Trump joke tops the Bee’s “greatest hits” list of pages that have drawn the most traffic—whom Dillon called an “outrageous figure” who deserved to be mocked.

Today, though, the site is known most for its critique of liberal politicians and what Dillon called the “woke mind virus.” He describes the Bee as a satire site with a Christian worldview that is devoted to mocking bad ideas in popular culture.

Ford remains a part owner of the Bee and also runs “Not the Bee,” which aggregates weird headlines, often about progressives.

While the Bee’s website still offers a mix of jokes—twin headlines “Churchgoer Turned Into Pillar Of Salt After Turning To Glare At Sound Guy” and “Satan Leads Prayer At Trump Rally” topped the site on Monday—the political jokes and jabs at progressive culture attract the most attention, dominating both the site’s “buzzing” list, which tracks trending stories on the site, as well as the Bee’s greatest hits.

“They do a great job at bringing awareness to the absurdity that drives much of our culture,” said Alex MacArthur, a software engineer and Bee fan from Nashville, Tennessee.

The site’s writers seem particularly obsessed with U.S. Rep. Alexandria Ocasio-Cortez, running two dozen stories about the New York Democrat in 2022 alone. For subscribers, who pay between $4.17 and $15 a month for ad-free content and other premiums, the site offers a top 10 list of Ocasio-Cortez jokes (“AOC Engaged, Registers For $10,000 ‘Tax The Rich’ Toaster,” “AOC Cries Outside Disney World In Dress Reading ‘Groom The Kids’”).

The site has run a number of anti-trans jokes—mocking both particular transgender people like Levine as well as fictional trans people. One of the site’s greatest hits is about a motorcycle rider who wins races by “identifying as a bicyclist.”

The Bee’s satirical forays into culture war issues have earned a loyal following—the site draws about 20 million page views a month, said Dillon—and the ire of many.

Along with having its Twitter account suspended, The Babylon Bee has been dinged by fact-checkers and social media sites for sharing disinformation. That has cost the site traffic and money, said Dillon. Even so, the Bee tries to capitalize on what Dillon called big-tech censorship of conservative viewpoints by running ads highlighting its clashes with social media gatekeepers to attract subscribers.

“It helps expose them for being not just humorless scolds but big-tech tyrants,” he said.

Matt Sienkiewicz, chair of the communication department at Boston College and co-author of That’s Not Funny: How the Right Makes Comedy Work for Them, said The Babylon Bee is part of a larger, highly successful conservative comedy ecosystem.

But the Bee’s success in promoting “anti-liberal comedy” has come at the cost of drowning out the Christian satire, in Sienkiewicz’s opinion. Fans who came to the site for church humor likely no longer see those jokes because they don’t feed the outrage algorithm or because they are turned off by the politics.

“The stuff that no one else can do has been lost,” he said.

Much of today’s humor, he said, is shaped by what he called “clapter”—where people applaud because they agree with the person making the joke, rather than laughing at themselves.

“It might be funny but it loses some of the joy,” he said.

Sienkiewicz said attempts to label the Bee as misinformation are silly, as the site is clearly satire. But, he said, the Bee risks falling into a “risk-averse strategy” when it comes to comedy by only telling the jokes its audience will agree with.

“One of the saddest things about the state of American politics is that it makes comedy harder and less interesting,” he said.

Ethan Nicolle, a conservative writer from California and a Babylon Bee staffer from 2018 to 2022, agrees.

Nicolle, who was creative director of the Bee in the early days of working out of editor in chief Kyle Mann’s garage, said he loved working for the Bee and having the chance to poke fun at the state of American culture—some of which he believes is very unhealthy.

“They tell the jokes you aren’t supposed to tell,” he said.

Still, he suspects the country’s polarization makes satire more difficult. People are afraid to critique their own side—and unwilling to be friends with anyone on the other side.

“All of the joy of life comes from your relationships with other people,” said Nicolle. “And to cancel another human being because of something political they said makes no sense. And we’re doing that with half the country.”

So far, Musk’s takeover of Twitter hasn’t paid off for the Bee—the site’s Twitter account remained suspended as of early November. But the Bee’s staff did score a long, in-person interview with Musk, in which he discussed censorship, sustainable energy and his own religious background, which included attending both Hebrew school and Sunday school at an Anglican church and believing in “the God of Spinoza.”

Musk also said he’s a fan of the teachings of Jesus.