The case of Mark Houck was one of more than two dozen the DOJ has pursued against pro-life protestors since “Dobbs.”
Emily Belz|January 30, 2023 04:30 PM 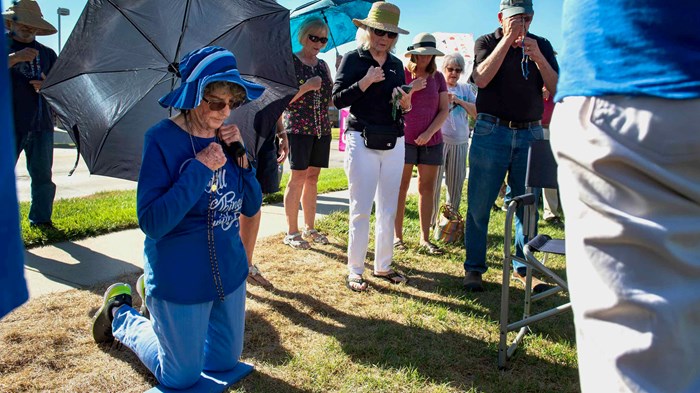 Houck’s federal case, where he faced up to 11 years in prison, was one of more than two dozen filed against pro-life protestors in the months after the US Supreme Court’s ruling in Dobbs v. Jackson.

The charges fell under the federal Freedom of Access to Clinic Entrances Act, or FACE Act, which makes it a crime to impede access to clinics. In Houck’s federal trial in Pennsylvania last week, the judge had asked whether the FACE Act was “stretched a little thin here,” according to Catholic News Agency.

A Catholic, Houck had been volunteering alongside his 12-year-old son in 2021 with 40 Days for Life, a Christian group that organizes prayer vigils outside abortion clinics, when he got into an altercation with a 72-year-old clinic escort. Forty Days for Life said the clinic escort began to “verbally abuse” Houck’s son, and the indictment said Houck pushed the escort. The escort testified in the trial that he skinned his elbow and bruised his palm, according to the Philadelphia Inquirer.

The case drew particular attention–including a night of prayer before the trial began last week–because of its handling by federal officials. After local prosecutors declined to file charges, federal prosecutors took the unusual approach of treating Houck as a flight risk and arrested him with a team of FBI agents a year after the clinic incident.

In a statement following the verdict, Houck’s attorney Peter Breen called the case “harassment from day one.”

Some pro-lifers have complained that the DOJ has not pursued cases against those vandalizing pregnancy centers as zealously as the cases against pro-life protestors.

That may be shifting a little. Last week the DOJ filed the first federal charges against two people who had vandalized Florida pregnancy centers, and the FBI recently announced it was offering a $25,000 reward for information about a string of arsons at other faith-based pregnancy centers.

Original post (October 20, 2022): In the past month, the Department of Justice (DOJ) has indicted more than a dozen pro-life protestors across the country for obstructing access to abortion clinics.

Such prosecutions have been rare historically, with just a case or two annually for the past decade. But after the US Supreme Court reversed Roe v. Wade this summer, the DOJ announced a task force to pursue more enforcement against anyone obstructing access to abortion clinics. Many of those protestors facing charges are Christian.

The Freedom of Access to Clinic Entrances Act, or FACE Act, prohibits obstruction of access to, threats toward, and destruction of clinic property. In these recent charges, protestors face up to 11 years in prison. Pro-life activists say the recent prosecutions seem politically motivated; some are now facing charges for incidents that date back more than a year.

An October 5 indictment of 11 protestors in Tennessee was about an abortion clinic blockade in March 2021. One case filed October 14 against a pro-life protestor concerned an incident from two years ago, when a group of protestors allegedly tied themselves with ropes and chains inside a clinic, blocking access.

Edward Mechmann, a former federal prosecutor who now is the director of public policy for the Catholic Archdiocese of New York, told CT it was “strange for the feds to go searching for old cases, especially for relatively minor crimes that would usually be dealt with by local prosecutors.”

Mechmann said he was surprised by “the heavy hand” in the blockade indictments. Though blockading a clinic is a violation of FACE, he thinks the DOJ could have pursued civil remedies without going straight to criminal prosecution.

“My suspicion is that a directive has gone out from main Justice [the DC office of the DOJ] to all the US attorneys offices to find FACE cases to bring,” he said. “Clearly, these cases are message prosecutions: Stay away from abortion clinics.”

After the Roe v. Wade ruling in 1973, pro-life protestors began the tactic of lying down and blocking abortion clinic entrances. Demonstrators shifted to less aggressive tactics after the FACE Act was signed in 1994, following the shooting injury of late-term abortion provider George Tiller.

In more recent years, pro-life demonstrations outside clinics have again been growing. In 2015, the National Abortion Federation tallied 22,000 protestors outside abortion clinics; that number rose to 99,000 over the next three years. The newer generation of protestors tend to focus on praying outside clinics instead of trying to block women from entering.

One of the recently indicted protestors, Mark Houck, was a volunteer with 40 Days for Life, a Christian group that mobilizes pro-lifers to stand and pray outside of clinics.

The organization requires its volunteers to sign a peace statement for protesting outside clinics, which reads in part, “I will pursue only peaceful, prayerful and lawful solutions to the violence of abortion by supporting life from natural conception to natural death.” If women engage volunteers in conversation, they will offer referrals to services to support them in their pregnancies.

A year ago, Houck, a Catholic who leads a ministry for young men, was praying outside a Planned Parenthood in Philadelphia. According to the federal charges, he shoved a 72-year-old volunteer escort of abortion clinic patients to the ground, which “resulted in bodily injury.”

Houck and 40 Days for Life dispute those charges. According to 40 Days for Life, the escort began to “verbally abuse” Houck’s 12-year-old son. The organization said Houck and the abortion clinic volunteer got into an “altercation,” then local law enforcement was called and determined no charges should be made.

At the end of September, a year after the incident, Houck said a large team of agents came to his house and arrested him at gunpoint in front of his children. The FBI has said it was a peaceful arrest, and that agents knocked on the door and asked him to come with them. The charges had been sealed until Houck’s arrest, treating him as a flight risk.

Some 40 Days for Life vigils are going on now. Jill Gadwood is currently leading one in Bethesda, Maryland, praying outside an abortion clinic belonging to LeRoy Carhart, who is famous for offering late-term abortions. The public sidewalk is far from the clinic entrance, so the volunteers don’t usually interact with any women going to the clinic.

“I personally am not worried about it,” said Gadwood, about facing charges.

Pro-life activists have also raised concerns that federal law enforcement has pursued these obstruction cases while ignoring the recent incidents of firebombing and vandalism at Christian pregnancy centers in the wake of Dobbs.

The legal fight around abortion clinic protesters has also intensified in the United Kingdom, where proposed legislation would ban even peaceful protest—prayer, hymn-singing, and the sign of the cross.

“We’ve never had an ordeal happen like this before,” Carney said, calling it “persecution” by the FBI. “We will continue to go out and peacefully pray. … We cling to the cross, we cling to Jesus Christ, and we go out unintimidated, we go out peacefully, we go out lawfully. We pray to end abortion by offering his hope and his mercy.”