As American evangelicals head to the polls, they disagree about the meaning of the contested phrase.
Daniel Silliman|October 31, 2022 01:55 PM 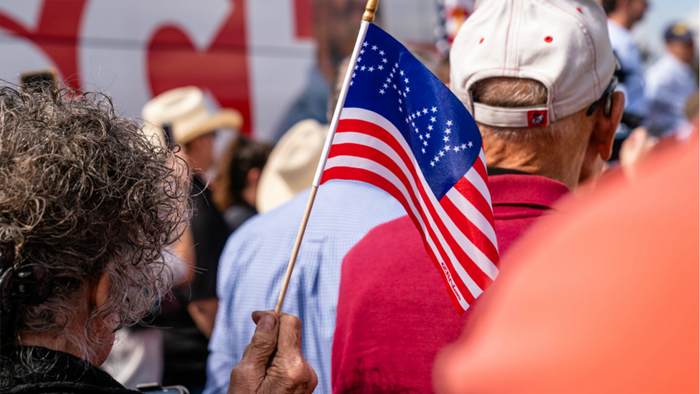 Image: Elijah Nouvelage/Getty Images
A woman in Georgia waves a flag that says “pray” at a rally for US Senate candidate Herschel Walker.

He’d heard it, here and there, but it hadn’t really registered. It was at the edge of his awareness and his vocabulary as he tried to understand the disputes over racism, the pandemic, and the election that rocked his evangelical church in suburban Phoenix throughout 2020.

Then the new year started, a mock gallows was erected at the Capitol, and his social media showed some in the mob carried signs that said, “JESUS SAVES.” His mind strained to make sense of the two things together, and he remembered from somewhere that there was a term.

“I needed that phrase to name it,” said Campbell, pastor of Desert Springs Bible Church. “This is a heresy. It’s a complete distortion of Jesus’ doctrine of power. I think Christian nationalism started in the Garden of Gethsemane when Jesus was reaching for the Cross, and Peter, who loves Jesus, thought he should protect him with a sword.”

As the political campaigns ahead of the midterm election have heated up, so has debate about the new political phrase. For evangelicals, the 2022 election has become, in part, a contest over what Christian nationalism is—whether just a slur used against conservative Christians voting their values or something new and malevolent.

Some Republican candidates are claiming the name, a best-selling book on Amazon argues that all real Christians are Christian nationalists, and a growing number of professional and amateur political commentators are using it to explain American politics right now. But there’s still a dispute about who counts as a Christian nationalist and what the term really means.

“I would say there are nine different definitions, from the people I’ve talked to,” Campbell told CT.

A Pew Research Center poll released last week confirms that the term is slippery. Not everyone is using it the same way.

Pew found that 45 percent of Americans think that that US should be a Christian nation. This includes 81 percent of self-identified white evangelicals, the same percentage that reported they voted for Donald Trump in 2016.

But only about 6 percent of those who want the US to be a Christian nation think that the government should be run exclusively by believers. Less than 1 percent say they want the state to give special privileges to Christians.

It’s more common for people to explain they want Americans to be guided by Christian beliefs and values (48%) or generally be moral (21%). One out of every three people who want America to be a Christian nation will clarify, when asked, that that isn’t a statement about the government at all. They want Americans—individuals—to have faith in God.

That broader version that Pew calls “Christian nationalism” is embraced by 65 percent of Black Protestants, more than half of white nonevangelical Protestants, and about a third of Hispanic Catholics.

But to some academics researching Christian nationalism, that broader idea is way too broad. Saying aspirationally that America should be a Christian nation is not the same as saying it nostalgically, sociologist Samuel Perry told Sojourners magazine. The term, Perry argues, should only be applied to those calling for a return to a time when “people like us” held cultural and political power.

In the book that Perry cowrote with sociologist Andrew Whitehead, Christian nationalism is defined as “an ideology that idealizes and advocates a fusion of American civic life with a particular type of Christian identity and culture.”

And for them, that “particular type” is very particular.

“It is as ethnic and political as it is religious,” they write. “Christian nationalism contends that America has been and should always be distinctively ‘Christian’ … from top to bottom.”

There’s a strong link between the historical and political views, according to evangelical historian John Fea. They’re not identical, though. Pew backs this up: Sixty percent of Americans say the founders intended to start a Christian nation, but more than a quarter of those say America has changed and shouldn’t be a Christian nation now.

Christian nationalism, however, appeals to that often-accepted narrative of the founding to legitimize its political goals.

“It always uses the past to advance a right-wing agenda,” Fea wrote in an email to CT. “I see Christian nationalism as a contemporary political movement, but it ALWAYS draws upon the view that the founders created a Christian nation and we thus need to reclaim, renew, and maybe even restore that Christian founding.”

For evangelical pastors who reject Christian nationalism, though, the debate is not really about history. They remember people arguing about the founding as far back as the 1980s, when evangelical historians Mark Noll, George Marsden, and Nathan Hatch clashed with worldview apologist Francis Schaeffer. And people were still arguing about it in 2010s, when Grove City College professors Warren Throckmorton and Michael Coulter pointed out the many factual errors in popular historian David Barton’s book on Thomas Jefferson.

Christian nationalism seems like the next step in an evolution.

Hutchinson said he’s most concerned about the idea that Christians should control the government, barring non-Christians from civic life or even denying them civil rights.

According to Pew’s survey, 42 percent of white evangelicals think that religious diversity is bad for America.

“There’s a more innocent use of the term Christian nationalism,” Hutchinson said. “But when I heard it, I thought, ‘Oh. Okay. That encapsulates a thing I’m terrified of.’”

Other evangelicals opposed to Christian nationalism want to focus specifically on the use of power. Campbell, in Arizona, thinks the argument is not really about political ends, but rather means. Christian nationalism is distinct from other kinds of Christian involvement in politics, he says, because of how it justifies the pursuit of power.

This is how Christian activist Shane Claiborne talks about it. The author of Jesus for President, which was rereleased this year, says Christianity is always political. “Jesus is Lord” is a political declaration. But Jesus’ followers are called to recognize and reject the soul-warping temptation of power.

Christian nationalism, according to Claiborne, is a kind of “delta variant” of this age-old temptation that Jesus’ followers always face and that Jesus himself faced when the Devil offered him all the kingdoms of the world (Matt. 4:8–9).

“Jesus has a different way of approaching worldly power,” Claiborne told CT. “So the way that Christians navigate worldly power should be creative, imaginative, and suspicious of what it can to do to us.”

At least some of those who embrace the term Christian nationalism agree that it’s about power. Andrew Isker, pastor of a Reformed church in Waseca, Minnesota, and Andrew Torba, founder of Gab, an alternative to Twitter that doesn’t ban far-right extremist speech, released a 78-page booklet making an argument for Christian nationalism.

They say the US was Christian from the very beginning—even before the US Constitution and the Bill of Rights. But the historical argument isn’t the most important one for them.

They point back to the Great Commission. Jesus told his followers to “make disciples of all nations” (Matt. 28:19). They say that means Christians should “take dominion” over every sphere of life.

“We need Christian men who will embrace their God-given masculine energy to conquer and lead,” Isker and Torba write. “We are done being footstools. We are done being pushovers. Now we want to win. Win souls for Christ. Win elections. Win in the culture. Win in the education system. Win with our own technology. Our own media. Our own entertainment. Win for the glory of God.”

In the suburbs of Phoenix, Campbell said the people in his congregation are hearing this call to arms. This call to win. They’re hearing it from politicians, some evangelical leaders, and most frequently their Christian friends and family.

Increasingly, it feels to them like it’s not just about metaphorical fighting.

But they don’t always have a name for what they’re hearing.

“They have a guttural feeling, like in their stomach, that this feels wrong,” Campbell said. “But they don’t know what it is. ‘What is this beast?’”

The pastor tells them it has a name, Christian nationalism. And it’s no different than the choice Peter faced the night that Jesus was betrayed.

“I think we should be involved in politics, but there’s the way of the cross and the way of the sword,” he said. “We’re supposed to be a cross people.”