Black Church to National Park Service: Give Us Stones of Remembrance 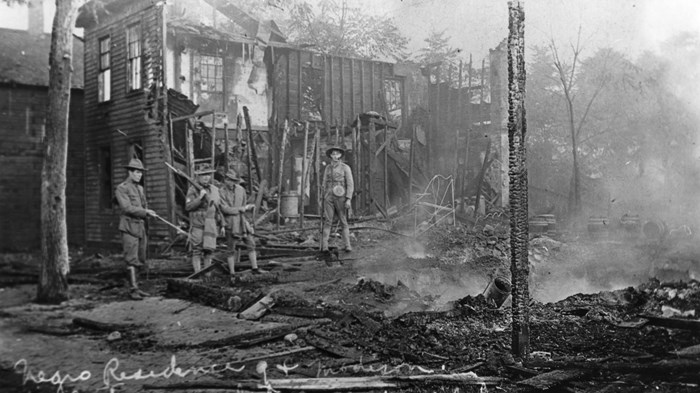 Image: Courtesy of Lincoln Library
Ruins of a Black neighborhood after the 1908 violence in Springfield, Ill.

In Lower Manhattan, people in suits pass by a green space with a modest stone monument on their way to the city’s big courthouses. They rarely stop to notice the African Burial Ground National Monument, marking the historic site where more than 15,000 Africans were buried when the city banned slave burials in church cemeteries.

The burial ground was discovered during a construction project in 1991 and was declared a National Historic Landmark in 1993. Yet it took more than a decade of political pushing and preservation work before the National Park Service (NPS) opened the site as a national monument.

Now Black church leaders are pressing the federal agency to develop more memorials like this one. They want to mark Black history on public land, and they have specific spots in mind like the site of the 2015 church massacre in Charleston, South Carolina.

This month, leaders of some of the largest Black Protestant denominations and several state Baptist conventions made formal overtures to the park service to memorialize a site connected with the 1908 Springfield race riots in Illinois. The NPS—which oversees historical markers and memorials on public land, such as the Martin Luther King Jr. Memorial in Washington, DC—currently has no sites documenting lynchings or mass killings of African Americans.

Separately, in a new survey from the National Religious Partnership for the Environment (NRPE), 700 Black church leaders listed their suggestions for possible memorial sites, noting that they felt their past input on public lands had been “politely ignored.”

Among the most popular responses were sites honoring Black leaders such as Malcolm X, Rosa Parks, Jackie Robinson, and Frederick Douglass as well as designations for historically Black colleges and universities, many of which grew out of local churches’ theological training programs.

The number one site church leaders thought should be preserved to showcase atrocities against the Black community was Charleston’s Emanuel African Methodist Episcopal (AME) Church, where a white supremacist killed nine African Americans meeting for a Bible study in 2015. They also mentioned documenting the 1906 Atlanta race riot, the 1873 Colfax massacre, and the 1923 Rosewood massacre.

“We didn’t provide them a checklist. … To have something repeatedly named, to me that's a big deal,” said Cassandra Carmichael, the executive director of NRPE. “Now we’re going to dig into some of these places to find out what could we tell, what could we advocate for to be protected.”

Other Sites Pastors Named for Memorials:
- The 5,000 Rosenwald schools in the South, of which 500 remain;
- The last-known slave ship to arrive in the United States, the Clotilda, which is currently underwater in Mobile, Alabama, after being discovered in 2019;
- Lake Lanier, a man-made lake in Georgia that flooded a Black town that had first been forced out by lynchings and violence.

Creating a new area under the National Park Service requires an NPS study and approval by Congress or the president. The park service is in the process of studying more African American landmarks to recommend and has been looking at a site to memorialize the Springfield race riots for the past five years, according to Tokey Boswell, an NPS associate regional director.

The proposed Springfield site, a few blocks from the Lincoln Home National Historic Site, would mark the remains of five homes destroyed during the violence.

The 1908 brutality in Springfield stemmed from an accusation that a Black man assaulted a white woman, spurring white residents of Springfield to mob violence. They burned Black homes to the ground and lynched Black men, and 2,000 Black residents fled the city for good.

“Through our faith, we envision an exceptional future,” wrote the head of the Baptist General State Convention of Illinois, Mark A. McConnell, in his letter to NPS. The convention was founded in 1902, at a church a few blocks from the proposed site of the monument. “We know that we can attain redemption as a nation for the racial injustices committed if we, as a nation, confess and acknowledge the true course of events and the impacts that they had.”

Denominational leaders who wrote the NPS about a national monument at Springfield represented millions of churchgoers, including the presiding bishop of the Church of God in Christ, the bishop of the African Methodist Episcopal Zion Church, the college of bishops for the Christian Methodist Episcopal Church, the president of the Progressive National Baptist Convention, and the president of the National Black Presbyterian Caucus, among others.

Almost all the letters noted not just the atrocity of the riot but also its role in the formation of the NAACP.

All the letters were addressed to the NPS’s Boswell, who said it was “a very impressive showing from the Black clergy.” The NPS will finish its study next year, and it can give a positive or negative report on the site. Then it’s up to Congress or the president to order a monument. Illinois lawmakers have introduced measures in the US House and Senate to create one in Springfield. Every site is unique, Boswell added: “Sometimes Congress will make it a unit the very next year, … sometimes in 10 years.”

Memorializing such history is healing for the Black community, the clergy said, and it can correct national misconceptions.

New York, for example, often lives in denial of its slaveholding history, but places like the African Burial Ground bring attention to that past. Before the American Revolution, New York had the largest slave population outside the South. Slaves built roads like Wall Street and Broadway as well as the city wall.

Slavery existed in this northern state well after the Revolution too. On Staten Island, Black historians have pushed for decades for a little marker to denote a Black church cemetery where the last slave born in the borough is buried—a man named Benjamin Prine, who died in 1900. The cemetery has since been paved over and is now home to a parking lot for a bank, a 7-Eleven, and a paint store.

Richard Dickenson, a Black historian in the 1990s, managed to get the bank to display a small plaque about the cemetery, but the plaque was later taken down. Now a different bank has moved in, and Dickenson has since died. Another Black historian who specializes in Staten Island, Debbie-Ann Paige, has taken up the cause for the cemetery.

Filmmaker and genealogist Heather Quinlan found the living descendants of Benjamin Prine. They lived a mile away from the cemetery on Staten Island but didn’t know that it existed, that they had an enslaved ancestor buried there, or that there had even been slavery in New York, Quinlan said.

“We were supposed to be … We took in the huddled masses!” said Quinlan. “[Slavery] was [used by] the barbarians down south. And if we did it, it wasn’t that bad.”

The NPS can’t do anything on private land, though it has consulted with locals about how they could memorialize the church cemetery. Quinlan and others have discussed what the city could do on the sidewalk beside the strip mall, such as plant a tree or install a plaque, in honor of those buried in the cemetery.

Now the family, historians, and Quinlan can celebrate a little: On October 3 the street that runs alongside the strip mall over the cemetery will be co-named Benjamin Prine Way. Quinlan said it would be the first street in New York named for a formerly enslaved native New Yorker. Nearby is Van Pelt Avenue, which bears the same name as Prine’s owner, pastor Peter Van Pelt.

Quinlan has been working on a documentary about the cemetery and is trying to uncover more records about the AME church there. Researchers know of 50 graves specifically in the church cemetery under the pavement, but “there could be up to a thousand,” said Quinlan.

The survey of Black pastors frequently mentioned Black cemeteries as potential locations for memorials. Like the New York sites, many were destroyed or paved over for development.

“It would give us some sense of solace to know that the larger culture is concerned about hearing our story and has the courage to be able to listen,” said Gregory Williams of Holsey Temple CME Church in Atlanta.

Black Church to National Park Service: Give Us Stones of Remembrance

Black Church to National Park Service: Give Us ...