He believed “Christians should set an example of the utmost integrity.”
Daniel Silliman|September 28, 2022 01:30 PM 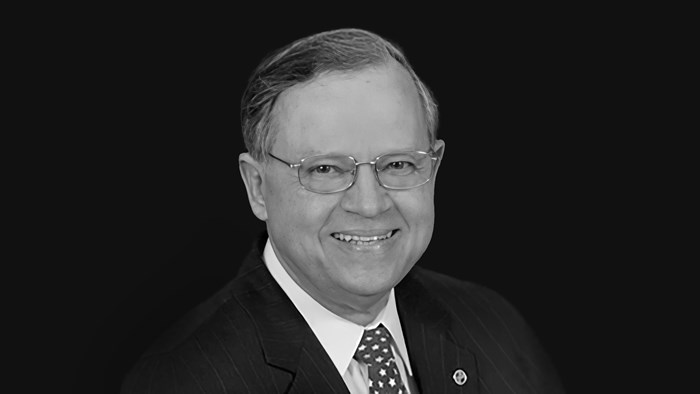 Dan Busby fixed his father’s tax returns when he was a junior in college. In the process of correcting some mistakes and figuring out the proper deductions for the Wesleyan pastor and evangelist, he discovered his life’s calling.

“The Lord planted a seed in my heart,” Busby said in a 2018 interview, “that someday I should help fill the void.”

Busby served as senior vice president of the accreditation agency from 1999 to 2008 and as president from 2008 to 2020. During his presidency, the number of ministries maintaining a membership with the EFCA nearly doubled, reaching a total of more than 2,400, including 50 of the 100 largest churches in the United States.

The NonProfit Times named Busby one of the top 50 nonprofit leaders six times between 2010 and 2015. When his retirement was announced in 2019, ECFA board chair Danny de Armas described him as loved, admired, and respected.

“Dan is an incredible leader who has grown ECFA’s membership and influence,” de Armas said. “Dan’s legacy will linger in the valuable resources he developed that serve ministry leaders and pastors in their efforts to operate above reproach.”

Busby was born to Howard and Bertha Orr Busby in 1941. The family lived in Lamont, Kansas, a farming community of about 30 people, located halfway between Topeka and Wichita. Bertha taught public school, and Howard pastored a small Wesleyan church when he wasn’t traveling the country holding camp meetings.

The young Busby went forward at one of those camp meetings when he was 14. The aisle wasn’t covered in sawdust, but otherwise it was a classic summer tent revival, with enthusiastic crowds, group singing, and sermons about the need to make a decision for Jesus.

“That was in the day when the camp meeting evangelist preached on heaven and hell,” Busby later said. “And when they preached on hell, it was hot enough you could almost feel it.”

He went forward on a Saturday night and committed his life to Christ. He never wavered from that pledge.

When Busby wasn’t in church or school, he spent his time learning how to be a baseball umpire. He studied with a minor league umpire and liked it so much, he considered doing it for a living.

“Rules are the backbone of baseball,” Busby said. “Without them, the game would quickly turn into chaos. The rules must be so thoroughly understood by an umpire that they are applied instinctively—often in a split second.”

Despite his love for calling balls and strikes, Busby decided an umping career wasn’t practical. He went to nearby Emporia State University to study accounting. He earned a master’s in business administration and then went to work as a controller at the University of Kansas Medical Center.

In 1975, he left the medical center to start his own certified public accounting firm that specialized in handling finances for Christian ministries. By the 1980s, Busby was considered a leading expert on accounting issues related to nonprofit fundraising and spoke frequently to accountants about direct mail.

Busby left the firm to take a position as the chief financial officer at the Wesleyan Church, headquartered in Fishers, Indiana. He wrote The Minister's Tax and Financial Guide and The Church and Nonprofit Tax and Financial Guide, and Zondervan published the first editions of both in 1990. Busby joined the ECFA staff in 1999.

The ECFA was founded after several high-profile financial scandals to encourage self-regulation among evangelical ministries and avoid increased scrutiny from the federal government. Busby, the first certified accountant to lead the organization, sought to further raise standards and professionalize more ministries’ self-regulation. He pushed regular, external audits; emphasized the importance of independent boards; and made it a goal to better educate board members about governance.

He played a key role in convincing Senator Chuck Grassley, an Iowa Republican and the ranking member of the Senate Finance Committee, not to back additional regulations for religious nonprofits in 2011. Grassley was disturbed by reports of the lavish lifestyles of televangelists; Busby argued that these were exceptions and that new tax rules would not stop abuse but would infringe on religious liberty.

After a three-year investigation into six televangelist organizations, the Iowa senator came out with a recommendation for exactly what the ECFA had to offer.

“The challenge is to encourage good governance and best practices,” Grassley said. In another interview he added, “Self-correction can be more effective than government action.”

Busby also spoke about the need to protect Christian ministries from media scrutiny and warned of the growing dangers of internet watchdogs. He was especially frustrated by bloggers, whom he saw as irresponsible and unfair. On one occasion, he said critics of churches and pastors were angering God and getting in the way of God’s work.

According to Busby, Christian ministries had to be careful not to be too transparent, lest they leave themselves open to unrelenting internet attacks. But the real solution to increased scrutiny, he said, is to be above reproach.

“What an opportunity for ministries seeking to fulfill the Great Commission to be models of integrity and accountability during the swirling turbulence!” he wrote. “The issues generally relate to finances, fundraising/stewardship, and governance; all three are found in the core of ECFA’s standards. It is a time to be trustworthy in all these areas.”

In 2019, however, the ECFA itself faced a crisis of trust. Blogger Warren Throckmorton, independent journalist Julie Roys, and World magazine investigative reporter Michael Reneau documented multiple instances where the ECFA overlooked egregious violations of its accreditation standards. It failed to act as an umpire, allowing organizations with disastrous financial mismanagement to continue carrying the ECFA certification until the problem was publicly exposed.

Busby, for his part, remained unconvinced of the need for watchdogs or external regulations. He stepped down from the ECFA presidency in 2020 but continued to promote financial accountability through self-regulation and teach ministry leaders about the importance of proper governance through books such as Lessons from the Church Boardroom and More Lessons from the Church Boardroom, both cowritten with Christian management consultant John W. Pearson.

Pearson and Busby also collaborated on a self-assessment tool for nonprofits, with six items for boards to evaluate their health.

“I believe Scripture makes it clear that Christians should set an example of the utmost integrity, in and out of the marketplace,” Busby said. “It has been a joy to see a significant increase in the groundswell of churches, ministries, and leaders worldwide who are stepping up to embrace accountability.”

In retirement, Busby returned to his love for baseball, writing a book about Babe Ruth and another about Jackie Robinson based on his extensive study of tickets, passes, and memorbilia. Before and After Jackie Robinson was published in August, a month before he died.

Busby is survived by his wife, Claudette, and their two children, Julie and Alan. An online memorial service will be held on October 21.