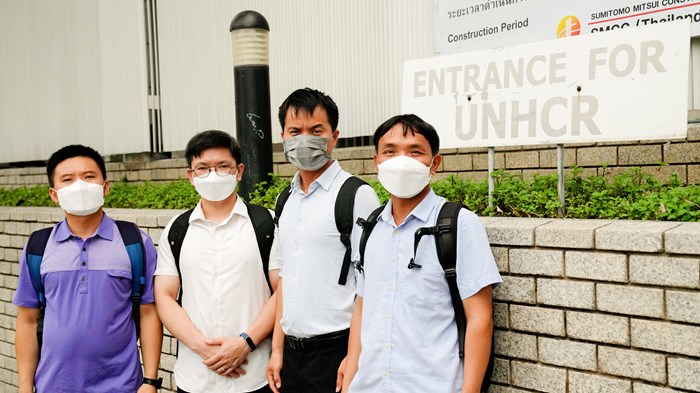 Image: AP Photo/Sakchai Lalit
Members of the Shenzhen Holy Reformed Church in China prepare to submit their applications for asylum at the United Nations refugee office in Bangkok, Thailand.

Pastor Pan Yongguang and nearly all of the 61 members of his Chinese house church have arrived in Thailand. The congregation left the southeastern city of Shenzhen for South Korea between 2019 and 2020, trying unsuccessfully for months to gain refugee status.

Last month, the group left Jeju Island for Bangkok, hoping to appeal to the UN refugee office. Their search for a home continues as they hope to make one more move in the near future, this time to the United States.

It’s a search that has come at a significant cost.

The congregants of Shenzhen Holy Reformed Church (SHRC) left their professional jobs, their homes in Shenzhen, and elderly parents—just before the start of the pandemic. Pan has shouldered the responsibility of not just the spiritual care of his congregants, but the logistics of everyday life—including work, housing, medical care, safety, and travel—in foreign countries. He’s also faced pushback from some Chinese churches who believe he should stay and face persecution rather than run away.

But he believes he’s following God’s call to lead his church to greater freedom, like the Pilgrims aboard the Mayflower: “For the flock’s spiritual blessing I’ve invested more and paid a higher price,” Pan said. “Nobody flees like this with kids and women from one county to another. This isn’t fleeing. This is leaving Egypt.”

After quietly leaving the South Korean island of Jeju in late August, Pan announced his congregation’s latest whereabouts to the world through a Wall Street Journal (WSJ) article on Monday. That same day, congregants applied for refugee status at Bangkok’s UN refugee office. Their hope to resettle in the United States has the backing of US officials including former Representative Frank Wolf, head of the US Commission on Religious Freedom.

In the meantime, the group faces dangers in Thailand. Not only do many in the party need extensions on their tourist visas or risk being in the country illegally, they say they are being monitored by Chinese operatives and fear repatriation to the Mainland. One family is still stuck in Jeju as the Chinese consulate won’t give their newborn daughter a passport, rendering her stateless. This stress is pushing the members of the “Mayflower church” to the brink.

“I often pray and ask God for more grace and strength,” said Pan. “These past two years were difficult to bear. They’ve been the hardest time in my pastoral ministry.”

Nie Yunfeng began attending SHRC in 2012 and for several years taught at the Christian school started by the church. She remembers law enforcement pressuring the landlord to evict the school and church, causing them to constantly move locations. Police would barge into worship services or classes, telling them to break up their meetings.

The pressure increased after the implementation of the revised religious regulation in 2018, with church leaders facing increased monitoring and interrogations. Police insisted Pan shut down the school, disband the church, and stop contact with churches in the West (SHRC is tied to the Presbyterian Church of America).

So when Pan concluded the only option was to leave China, Nie was convinced, especially as she considered her children’s future. In the fall of 2019, she and her two children arrived in South Korea, where Pan and her initially uncertain husband had been scouting out a place for the church to go.

“In China we are unable to see the true information,” she said of her husband’s change of heart. “When my husband investigated things in Korea, he could see the truth and [leaving] became more urgent.”

About 60 congregants, half of them children, joined them on Jeju Island, a tourist destination off the southern tip of the Korean peninsula.

Once in Jeju, they were surprised to find the Korean government typically rejects nearly all asylum claims from Chinese nationals. Without legal status, many of the formerly middle-class congregants worked menial jobs including washing dishes and harvesting vegetables.

Pan said many people were exhausted from the labor-intensive work that paid meager wages. Jeju winters were cold and snowy, unlike steamy Shenzhen where winter lows are temperate. Some received calls from people claiming to work at the Chinese consulate asking them to come pick up packages, which they feared was a trap. Back in China, police harassed church members who stayed behind and questioned the family members of those who left.

Nie said she doesn’t regret leaving China, but things became more difficult when her father-in-law was diagnosed with liver cancer. Her husband, who is the only son in the family, wanted to be there to care for his father, but they realized that if they returned, they would face repercussions and never have another chance to leave.

Despite the challenges, the church was able to worship together freely each Sunday, first at a rented space, then in a Korean church that allowed them to use their building, and finally at a hotel dining room. Nie said she could finally worship in peace, no longer fearful if they’d be raided or jumping at the sound of a knock on the door.

She is grateful her children have been able to securely attend the church school—in China, many of these schools have been closed and parents forced to send their children to government schools. Nie gave birth to a baby while in Jeju in 2020 and now is 34 weeks pregnant with their fourth child.

This February, SHRC lost the final appeal of their original asylum case. In order to avoid deportation, the entire congregation refiled their asylum claims, which cost $1,000 per person.

After Korean and US officials informed the church members they were unlikely to receive refugee status in Korea, Texas-based persecution advocacy group ChinaAid suggested a possible pathway out: getting the whole group to Thailand, where they could appeal to the UN refugee office. Unlike Korea, Thailand is not party to UN refugee treaties, and so the agency—rather than the government—can directly process and determine refugee cases.

In a vote, church members decided their best move would be to go to Thailand. So in August, the group moved to yet another new place where they didn’t speak the language or understand the culture. With Nie’s due date fast approaching, she and her family arrived in Thailand first to receive medical care due to complications in her pregnancy.

Once in Thailand, the church faced increased dangers they didn’t experience in Jeju: People they understood to be Chinese operatives tailed the group, taking photos and videos everywhere they went, according to Pan and other sources. When they dropped off their applications at the UN refugee office on Monday Monday, Pan noticed a car parked across the street with a man inside videotaping them. Later, two strangers sat nearby and videotaped them as Associated Press journalists interviewed Pan and the church members.

“After arriving in Thailand, I truly felt the danger,” Pan said. “Even though in Korea I knew Thailand would be more dangerous, these past few days I’ve seen that it’s much more dangerous than I imagined.”

Church members worry the Chinese government could take them and repatriate them back to China, where they would likely face severe punishment, a not-unfounded fear.

They’re also concerned about the family who is unable to leave Jeju. After a WSJ reporter reached out to the Chinese consulate in Korea inquiring about its refusal to grant the baby a passport, an officer called the family warning they were harming national security, according to ChinaAid’s Bob Fu. The officer then urged them to write a confession admitting that they were wrong for leaving China and that the church forced them to go to Jeju. In exchange, the consulate would give them the baby’s passport, Fu said.

Meanwhile in Washington, DC, Fu and US officials are advocating for the Biden administration to resettle the group in the United States. Churches in Texas have already agreed to sponsor the congregation after their arrival, providing housing, living expenses, and help settling in. The US has often provided resettlement or humanitarian parole for people facing persecution from the Chinese government, including formerly detained Uyghurs, human rights activists, and house church Christians (including a family from Early Rain Covenant Church.)

In response to CT’s inquiry, the US State Department said it did not comment on individual cases but was committed to helping victims of religious persecution around the world.

Pan said his rapidly thinning hair is a sign of the stress he’s been under leading the church in the wilderness these past few years. At times, he said, he felt so weak that he didn’t think he could carry this responsibility. He’d take walks with his wife, talking and praying about his troubles.

Reading and meditating on Psalms has also brought Pan solace, he said. The church typically sings psalms every Sunday and at the beginning of each school day, so the laments and worship of David and the psalmists are well worn on their lips. As the church members all lived in the same building in Jeju, he would hear different families singing the psalms through the walls, a beautiful sound of praise.

When congregants come to him homesick and longing for their family in China, Pan reminds them of their true home: “On earth, Christians are sojourners. We can keep moving forward, but Thailand isn’t my destination; neither is the United States. We are walking toward our heavenly home.”

[ This article is also available in 简体中文,  한국어, and 繁體中文. ]