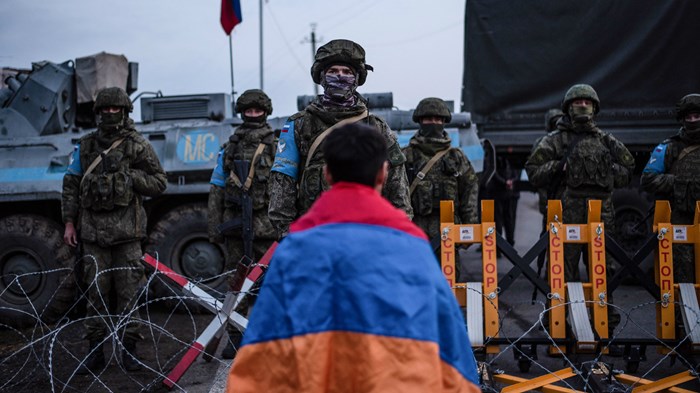 There are no oranges in Artsakh for Christmas.

Celebrated on January 6 according to the local Orthodox calendar, holiday festivities will be curtailed this year in the disputed Caucasus enclave of Nagorno-Karabakh. Demonstrations by reported environmental activists from Azerbaijan have closed the one road connecting the mountainous territory to Armenia, and Russian peacekeeping forces have failed to intervene.

Over 100,000 Armenians depend on daily imports of 400 tons of food and medicine to the enclave they call Artsakh. With the blockade of the Lachin corridor now in its third week, local officials are warning of a humanitarian disaster as they implement price controls and ration remaining goods.

But the Christmas tree is lit in the central square of the capital, Stepanakert.

“People will carry on with the traditions as best they can,” said Aren Deyirmenjian, country representative for the Armenian Missionary Association of America (AMAA). “But we will reflect the love of a God who stays by your side, even when all goes wrong.”

During a 44-day war with 6,500 casualties in 2020, Azerbaijan recaptured three-quarters of its internationally recognized sovereign territory, before Russia engineered a ceasefire. The indigenous Armenian inhabitants controlled the enclave for the previous 30 years, claiming the right of self-determination in an unrecognized 1991 independence referendum.

Following its defeat two years ago, Armenia pursued peace treaties with neighboring Azerbaijan and Turkey, which had backed their Turkic Azeri kin with decisive drone technology. But these were interrupted by further clashes in which Azerbaijan seized more territory in Nagorno-Karabakh and even along Armenia’s border.

And beginning December 12, Azerbaijani activists set up camp to protest alleged illegal gold and copper mining, exported through Lachin back to Armenia. Terms of the armistice left Russian peacekeepers in charge of the road, with no Azerbaijani oversight.

“We can stay here for months,” stated one demonstrator.

Local residents have reported shortages, with no fruit in Artsakh’s markets—part of the traditional Christmas Eve feast alongside fish, rice pilaf, and raisins. More critically, hospital patients lack essential medicines, with only a handful allowed transfer to facilities in Armenia proper. Gas supplies were cut for three days in the winter cold. And about 1,000 residents were stranded in the border town of Goris—including 18 members of a children’s choir that had performed in Armenia’s capital, Yerevan.

Azerbaijan has denied it is imposing a blockade. Officials have said that anyone will be allowed travel through the Lachin corridor upon prior permission and submission to local inspection. If none pass through, they blame the Russians and Armenians. 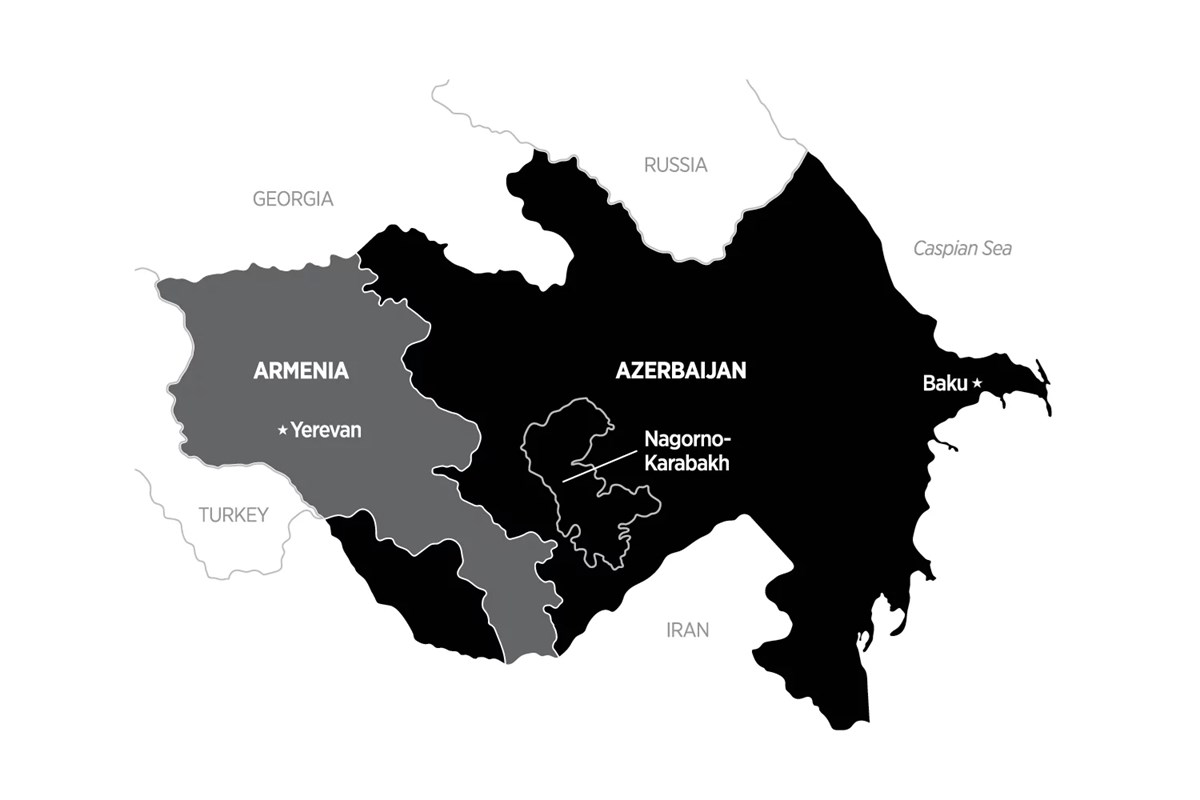 So far, only the International Committee of the Red Cross (ICRC) has gained access to Nagorno-Karabakh. Deyirmenjian said the Armenian social affairs ministry contacted the AMAA to participate in the ICRC’s 10-ton aid delivery, adding 220 pounds of infant formula to the first effort and 1,100 pounds of rice alongside two tons of sugar in the second.

Upon the aid’s arrival, the AMAA center in Stepanakert, located near the only Armenian Evangelical church in the enclave, coordinated distribution in the neighborhood, which included the congregation’s 125 members.

So far, local morale is high.

“Our office manager told me, ‘We are happy we are on this side of the blockade,’” Deyirmenjian said. “It gave me chills.”

Garegin Hambardzumyan concurs. A priest in the Armenian Apostolic church, he heads the Oriental Orthodox denomination’s Department for the Preservation of Cultural and Spiritual Values of Artsakh. Generations of Armenians have lived in the rugged, mountainous land for a thousand years, he said. They will not be scared away easily.

The Divine Liturgy for the January 5 Christmas Eve mass will be the traditional candlelight service, after which the faithful will carry the symbolic light of Christ back to their homes. Many will exchange gifts, and the church has distributed chocolate and Bibles to the 3,000 children who live in Nagorno-Karabakh.

“The family is the best place to feel the warmth of Jesus’ love,” said Hambardzumyan. “Continuing their life as if it were normal is a sign of dedication to their homeland.”

Last week, Armenia lodged a protest with the United Nations’ International Court of Justice, demanding the blockade be lifted. UNICEF, the UN institution for children, issued a warning. Pope Francis has expressed concern, and human rights organizations have called for unfettered access.

But some anticipate worse—a sinister continuation of history.

“The process of the Armenian Genocide has been ongoing since the Ottoman massacres of the late nineteenth century,” stated John Eibner, president of Christian Solidarity International (CSI). “Now, by placing Nagorno-Karabakh under blockade, the dictatorship of Azerbaijan is clearly telegraphing its intent to carry out another phase of the Genocide.”

Cosignatories to the statement include In Defense of Christians, International Christian Concern, and the Union of the Armenian Evangelical Churches in Eurasia. Prior to the blockade, Genocide Watch had already identified four of its ten stages of genocide at play.

An anonymous Christian leader in Azerbaijan pushes back against the charge. Withholding his name due to the sensitivity of commenting on political issues, he said the local discourse emphasizes the government’s intention to treat the Armenians of Nagorno-Karabakh as citizens, living peaceably in a multicultural nation. If they fight, they will be driven out, he warned. But there is no fear of genocide.

At the same time, he concurred with skeptical analysis about the protesters.

“We don’t care about ecology as such; this is not Sweden and Greta Thunberg,” said the source, who has authored a series of books exploring the spiritual consequences of historic geopolitics. “It is ridiculous; it cannot happen without direct order of the government.”

Peoples of the East are indirect, he said, dressing their pressure campaign in the guise of environmentalism to resonate with Western concerns. He believes the goal is to push Armenia to finalize a peace deal while Russia is distracted by its war in Ukraine. Azerbaijan wants to make clear it holds the upper hand.

Additionally, if the blockade sets up a checkpoint system into Nagorno-Karabakh, it will aid Azerbaijan’s national security. The government issued reports that allege Iranian security services have entered the enclave.

Azerbaijan, though a Shiite Muslim–majority nation, is allied with Israel and is a key supplier of natural gas to Western nations. Tensions with Iran have increased recently as both sides conduct military drills on the border.

Others posit a different rationale.

“Azerbaijan cannot take this step without the agreement of Russia—it is a combined action,” said Vazgen Zohrabyan, pastor of Abovyan City Church, northeast of Yerevan. “Moscow is ready to sacrifice the people of Nagorno-Karabakh for its economic interests.”

Also a political analyst with a master’s degree from Yerevan State University, he believes the Ukraine war has pushed Russia to side with Azerbaijan over interpretation of a clause in the armistice agreement. While the Lachin corridor was left under Russian peacekeeper supervision, the agreement’s final point called for the opening of all transportation routes, specifically mentioning the link between Azerbaijan and its Nakhchivan enclave.

A 20-mile railway once linked the oil-rich nation with its noncontiguous territory to the west, stretching along Armenia’s border with Iran. Azerbaijan calls it the Zangazur corridor (Armenians call it the Meghri highway) and wants an access arrangement similar to Lachin’s status now, with no customs control. The armistice says that Russian border police will oversee security.

For Azerbaijan, this will create a direct link with Turkey—bordering Nakhchivan—and the rest of Turkic Central Asia to the east. For Russia, this will provide a path to export its own natural resources through Azerbaijan to Turkey and eventually Europe, evading sanctions and the Western boycott, said Zohrabyan.

But as a pastor, his chief concern is humanitarian.

Abovyan City Church currently supports 30 families in Nagorno-Karabakh, a continuation of its emergency relief to hundreds during the war. And it recently partnered with a local businessman to open a bakery in Stepanakert, with 10 percent of its bread supply dedicated to the needy. Zohrabyan was due to attend the grand opening with the chief adviser to the enclave’s president—until the blockade halted traffic. The bakery remains closed, unable to find the necessary flour.

Holding the unpopular opinion that Armenia must forge peace with its enemy, he blames both sides for maintaining an atmosphere of distrust. But while the comparison between corridors is “logical,” he said, it is not “diplomatically legitimate.”

Lachin is the status quo and must remain open. Other routes are to be negotiated.

Until then, like many, he fears Azerbaijan is using its superior position to impose a checkpoint. He does not readily raise alarm but is concerned.

“When Lachin opens, it will be one way—out,” said Zohrabyan. “It smells like another genocide, to make life as hard as they can so that the Armenians will leave.”

In his New Year’s speech, Azerbaijan’s president Ilham Aliyev stated the Zangazur corridor would be opened “whether Armenia wants it or not.” But his rhetoric has gone further. He has highlighted the surrounding region as Azeris’ ancestral land—to which they will definitely “return.” He even described Yerevan as a “political and strategic goal” that Azeris “must gradually approach.”

Some view this language as positioning for negotiation. But others see a wider territorial ambition. Last month, Aliyev called the ethnic Azeris of Iran “our people” and said he would “protect [their] secular lifestyle.” And of the Zangazur corridor, his ambassador to Turkey stated it would connect the “torn Turkic world.”

Armenia is in between.

But within the current crisis, so are a few scattered villages. Armenia closed its border to prevent confrontations with Azerbaijani activists, isolating ethnic Armenian hamlets in the process. Inside Nagorno-Karabakh but on the other side of the blockade, they are suffering also.

In a “testimony to God’s work,” the AMAA was able to reach them. A female staff member in Yerevan loaded her car with flour, oil, and other necessities and went in faith.

Along the way, she received a telephone call from the office of the prime minister. She did not know the female staffer or how her number was obtained but politely thanked her for the offer of help.

Upon reaching the border, she needed it. Blocked by authorities, a quick phone call back to the official allowed her to pass. The beleaguered villagers received a “testimony to God’s love” amid geopolitical tension.

“Azerbaijan says it wants to live in peace,” said Deyirmenjian. “But starving a people gives little evidence you want to live together.”