When words construct an empty faith, Pilgrim’s Progress asks, “What does truth require of me?”

When words construct an empty faith, Pilgrim’s Progress asks, “What does truth require of me?”

This article was adapted from episode seven of The Way to Glory.

Each week on The Way to Glory, we take a fresh look at a character from The Pilgrim's Progress, John Bunyan's 300-year-old masterwork. Subscribe now in iTunes, Google Podcasts, or Spotify.

One way to grow in love for the Lord is to steep yourself in the study of his word. Seeing the intricacies of Scripture, noting the nuances of the gospels, and learning how Jesus fulfilled more than 300 prophecies stores up knowledge and affection for God. But does that understanding of truth translate to genuine faith and good works?

Bunyan addresses this question through Talkative in The Pilgrim’s Progress. We invited Joe Thorn, author, podcaster, and founder and Lead Pastor of Redeemer Fellowship in St. Charles, IL, to give us his take on this character.

"Well then," said Faithful, "what is that one thing that we shall speak about?"

Now did Faithful begin to wonder; and stepping to Christian (for he walked all this while by himself) he said to him (but softly), "What a brave companion have we got! Surely this man will make a very excellent pilgrim."

At first monologue, Faithful is quite taken by Talkative, who seems to possess a knowledge of doctrine and spiritual things. What an ideal partner on this journey, Faithful concludes.

At this Christian modestly smiled and said, “This man with whom you are so taken will beguile twenty men who don’t know him.”

Faithful: “Do you know him, then?”

Christian: “Know him! Yes, better than he knows himself.”

“This character looks good from a distance,” Thorn says. “He loves to talk about spiritual things. He wants to talk about theology and the Bible. He really is a conversationalist but ultimately for all the wrong reasons.”

Thorn admits to his own Talkative tendencies. As a student in Bible college only three years into his Christian life, Thorn fell in love with books on systematic theology and late night debates in the dormitory lounge. Immersing himself in study and theory wasn’t the wrong decision, but along the way Thorn had separated his head from his heart and hands. At some point, his knowledge of God became disconnected from his experiences with God and obedience to God.

“I wanted to know the answers,” Thorn says. “I wanted to engage in conversation all the time, but I wasn't experiencing the truth that I was talking about—arguing about. There wasn’t piety or communion with God. And God graciously used a number of people and authors to convict me of that hypocrisy.”

Thorn is quick to clarify that neither Bible college, seminary, nor books and resources should be held responsible for his choices. But he recognizes that members of Christian communities that highly value theology, debate, and polemics can be tempted “to focus on the system above the Savior.”

“We so fall in love with our heritage and our confessionalism that Christ and our communion with him can become secondary,” Thorn observes. “I don't want us to be people who have the answers and are willing to speak of the Word but not obey it. We must be not be hearers of the Word but doers as well.”

Faithful: Say you so! Then am I in this man greatly deceived?

Christian: Deceived! you may be sure of it; remember the proverb, "They say and do not." But the kingdom of God is not in word, but in power. He talks of prayer, of repentance, of faith, and of the new birth; but he knows but only to talk of them...

His house is as empty of religion as the white of an egg is of savor. There is there neither prayer nor sign of repentance for sin; yea, the brute in his kind serves God far better than he…. Thus say the common people that know him, A saint abroad, and a devil at home.

Christian encourages Faithful to discuss the transformative power of the gospel with Talkative in order to determine whether religion is “set up in his heart, house, or conversation.” Soon enough, Talkative’s response reveals that his faith is as flat as his words as he grows defensive and, ultimately, departs from the group.

Thorn’s approach as a pastor is not to discourage people from theological depth so they don’t become Talkative-types. Rather, he encourages them to study with fervor, asking What does the truth require of me?

For those of us who are buried in books and rarely consider practical applications, Talkative reminds us that when we solely feed the mind, we fail to live as God intended. Only in bringing our heads, hearts, and hands into union can we experience the beauty of theology on display in our lives.

The Way to Glory is produced by CT Creative Studio in partnership with our sponsor Revelation Media and their upcoming movie, The Pilgrim's Progress, in theaters Easter weekend.

More from The Way to Glory

The Legacy of Pilgrim’s Progress Is up for Grabs 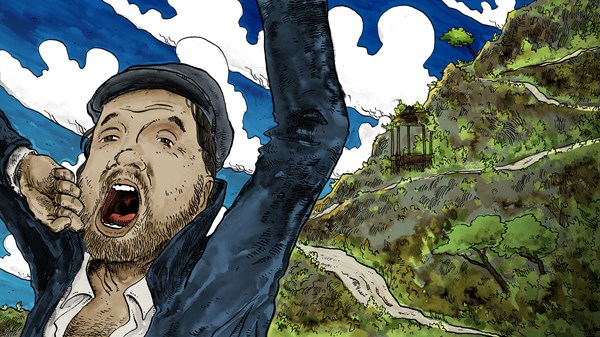