One way or another, decisions always get made—but using the right method helps make sure the result is a good one.
Em Griffin

The material in this article is an adaptation of a chapter from Em Griffin's book, Getting Together, published by InterVarsity Press.

You're the chairman of the Church's missions committee. You've held the post for two years, but up until now the group's duties have been routine-recruiting speakers, corresponding with missionaries, handling the funds that go to the denomination's mission board.

Now you're faced with a larger responsibility. This year marks the fiftieth anniversary of your church's founding. Your pastor wants. to celebrate by raising $50,000 for a special missions project. He's committed to making the campaign go, but he doesn't know what the project should be. That's your job.

You aren't completely in the dark. He's given you some overall guidelines: You're to focus on a single ministry, not a hundred different agencies. You're to invest in people rather than things. You're to find a project that will turn people on, a specific need that will capture their imagination.

Discipleship
Pastoring the One When You’d Rather Pastor the Ninety-Nine
Personal attention is a minister’s inefficient imperative.
Lee Eclov
Trending 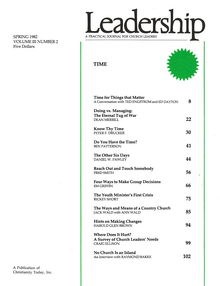 This article is from the Spring  1982 print issue of Leadership Journal. Subscribe to continue reading.