Getting older is like racing in the Indianapolis 500. The last 10 miles are what the first 490 are all about.
Fred Smith

A fifty-five-year-old friend of mine was talking at a party about being middle-aged. His wife heard him and said, "So who do you know who's 110?"

How old is old? Everyone is old to someone. To a six-month-old baby, a toddler is old. Ask a ten-year old how old is old, and he'll say, "Thirty." Yet there are people who are sixty and think of themselves as middle-aged.

North Americans are obsessed with two things: educational degrees and staying young. I asked an advertising copywriter with one of the major cosmetics companies, "When you write cosmetics ads, what are you really selling?" He answered with one word: "Hope."

People fight age. Our society does not respect its elder members as Eastern societies do. For us, aging is a problem. A friend recently noted that when he was twenty, he would read the obituary of a fifty-five-year-old man and think, "Why even put it in the paper? An old-timer has faded away." Now that my friend is sixty-five, however, he sees young men of sixty and seventy ... 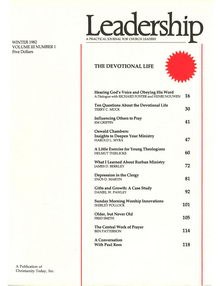 This article is from the Winter  1982 print issue of Leadership Journal. Subscribe to continue reading.