During the four years of Betsy's cancer (see "When Your Friend Is Dying"), her husband continued in full-time ministry. An inside look:

Monty Burnham's pastoral honeymoon was not yet over when he was sledgehammered with the surgeon's report. He had moved his family less than eight months before from the sun and surf of Monterey Peninsula to the narrow streets of metropolitan Boston, where the 250-year-old United Presbyterian Church of Newton awaited his ministry.

The congregation had been a historic downtown church until 1946, when it bought an imposing Gothic edifice only two blocks outside the city limits. The 550 active members had managed a two-year interim and were now eager to move forward under the leadership of this personable Californian. A former Young Life staffer (nine years), Burnham had most recently been an associate pastor. This would be his first senior position.

"One of the harder parts of being in the ministry during such an ordeal," he says quietly, "is that you're so ... 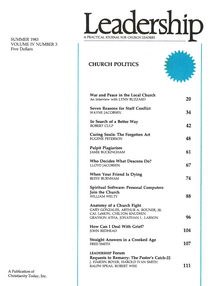 This article is from the Summer  1983 print issue of Leadership Journal. Subscribe to continue reading.