Fifteen years in the sme church bring many facets -- and many rewards.
George F. Regas

Fifteen years in the same church bring many facets and many rewards.

The average pastorate in North America is five years long. One minister who has stayed three times the average is George Regas, rector of All Saints Episcopal Church, Pasadena, California. He recently talked about the meaning of his stay in a sermon to his congregation.

Two people went up in a balloon one morning. All of a sudden they were enveloped by clouds and lost track of where they were. They drifted for what seemed like hours.

Finally, the cloud cover parted, and far down on the ground they saw a man.

"Where are we?" one yelled down.

The man looked around, looked up at the balloon, looked around some more, and then yelled back, "You're in a balloon."

The two balloonists looked at one another, and one yelled down again. "Are you an economist?"

His friend said, "How in the world did you know he was an economist?"

He answered, "No one else could give an answer so quickly that's so logical and tells so little about where ... 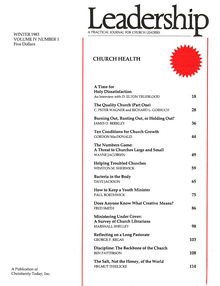