I put my son on the horns of a dilemma the other day.

My question was prompted by a study I had read the night before. A psychologist asked a group of five-year-olds to choose between their fathers and the television set. In the study, the overwhelming majority decided to keep the TV.

The study intrigued me enough to do some reading about difficult decisions. I found that social scientists call a choice between two equally attractive objects an approach-approach decision. Psychologist Leo Festinger did the most research in this area. He found that forcing a decision between two positive alternatives creates something called cognitive dissonance. Because the selectors want both objects, they are forced to fabricate reasons to accept the one and reject the other.

For example, I just bought an Apple home computer, and a friend of mine bought a Xerox. We have spent ...

Discipleship
Many parents have no idea what kinds of temptations the Internet holds, especially with teenagers and pornography. How can a church get parents and teens on the same page?
Gary Thomas
Trending 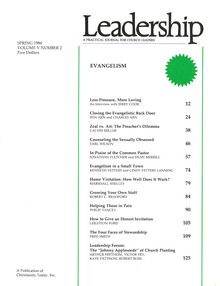