I live with a church that has a weight problem. The weekly spread of tasty music, erudite education, scrumptious social life, and gourmet preaching seems to produce ever more poundage on our padded pews.

In fact, the fare can get so rich that sometimes I think only the dessert of the eschaton would be enough to make the saints salivate.

The bulges under the garment of success began to show after only ten years of corporate life. By 1974 we had to admit that our increasing size was bittersweet. The frequent accomplishments—new buildings, staff additions—were often interrupted by a belch of discomfort as we sensed something amiss.

I was a member of the church at that time, serving as campus pastor at the denomination's nearby liberal-arts college. The pastoral leadership began to suggest one way to spell relief: m-i-s-s-i-o-n. But what would that solve? The mission budget was as obese as the rest of the church. Articulate guests came to the pulpit of Evangel Temple on a regular ... 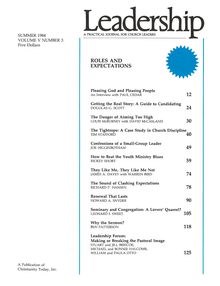 This article is from the Summer  1984 print issue of Leadership Journal. Subscribe to continue reading.