What do we mean when we say someone has vision? In part we mean the person is sufficiently aware of current events to identify future trends. Stories of those who cornered the market in raw widgets just two years before raw widgets became more valuable than diamonds are the stuff of which business legends are made.

For pastors, the story takes a little different turn. The pastoral visionary is the one who established a fledgling church on the Yucca Salt Flats just one year before a colony of six thousand multimillionaires decided the only place to build their new homes was the Yucca Salt Flats.

But one rarely hears about those whose vision, though emphatically stated, turns out to be less than 20/20. Several years ago, Paul Dickson, author of The Future File, noted in Saturday Review several of these avisionaries and the comments that made them infamous.

The abolishment of pain in surgery is a chimera. It is absurd to go on seeking it today. Knife and pain are two words in surgery ... 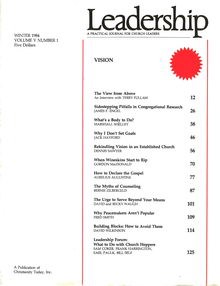 This article is from the Winter  1984 print issue of Leadership Journal. Subscribe to continue reading.