When helping parishioners with tough ethical decisions, the easy way is not always the best.
Richard C. Eyer

I could hardly blame the pastor. He meant well. The nurse called my office and said, "Mrs. Lavo is quite upset since her minister left. Could you see her? Mrs. Lavo and I had already spent several hours talking about her upcoming therapeutic abortion. The time was not spent making a decision, however. The options seemed clear: If she had the surgery, she would live; if she did not, she would die. Our hours together had focused on the sadness and understandable yet debilitating guilt that plagued her.

After much time spent reassuring her of God's grace and the sad necessity of this surgery, I left, planning to see her the next day.

That night her minister bustled in, and after hurriedly checking out the legitimacy of the abortion, left her with the words "Well, it's a good thing this is a therapeutic abortion. Otherwise it would be murder." He left, she panicked, and I was called.

Mrs. Lavo's pastor and I share at least one thing in common: We both are sometimes more attentive to the issues ...

END_OF_DOCUMENT_TOKEN_TO_BE_REPLACED
Already a subscriber? Log in
Read These Next 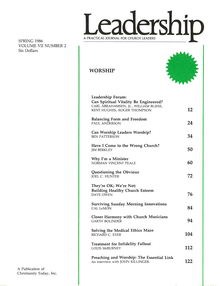 This article is from the Spring  1986 print issue of Leadership Journal. Subscribe to continue reading.