It was the first crisis of my first pastorate. I had challenged the people of that Colorado church to make a "faith promise" of increased giving for world missions. To my delight they committed an additional $5,700 per year, a 50 percent increase over the existing missions budget.

I practically floated to the missions committee meeting, where I recommended we draft a revised budget. But there wasn't even a second to the motion. As one committee member said, "Pastor, when the money actually comes in, we'll decide how to spend it."

I was hurt and angry. God, missions, and I had suffered a terrible defeat.

Seventeen years later, I see the episode very differently. What I then thought was a spiritual issue I now understand to be a generational issue. The difference was not that I trusted God and they did not. The difference was more that they had lived through the Great Depression and I had not.

We all tend to project our own experiences, perceptions, goals, and values ... 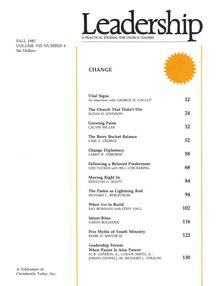 This article is from the Fall  1987 print issue of Leadership Journal. Subscribe to continue reading.