A guide for surviving those three painful words.
John Cionca

When Jack, a fellow pastor and friend, arrived for dinner, I could see he was troubled. Later he shared the source of his dejection: "Today one of my key leaders told me he's leaving the church." The member wasn't moving out of town. Just leaving.

While Jack spoke, I felt my own anger and hurt resurfacing from similar experiences in the pastorate. I wanted to help him, but other than sharing his discouragement over the loss of disgruntled members, how could I?

I decided to ask a dozen colleagues how they handle the emotional fallout from dropout members.

All of them share a sense of failure when a family leaves the church. A pastor in the Southwest admits: "Sometimes I have been able to say, 'Well, you can't win them all.' But when I'm alone with my thoughts, my mind wanders back to those people. I try to guess what's behind their leaving. I know I can't minister to everybody, but it hurts when people leave."

Another observed: "No matter how much explanation people give ... 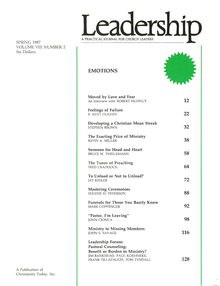