How to earn the congregation's esteem--and what to do when you don't get it.
Craig Brian Larson

One day at my previous church, my sermon was coming in a rush. Then the telephone rang. It was Terry, one of our members.

After some beating around the bush, he finally said, "Pastor, we're not going to attend at Central anymore."

Although he softened his adios with compliments and nothing-personals, it came as a blow.

I answered grimly, "I hate to see you go, but I want what's best for you and Karen."

Actually, Terry's departure was not a total surprise. For several months he and Karen had, inexplicably, grown distant, despite the fact I'd been giving them a lot of extra attention with several visits to their home. At those times, in an effort to lower barriers, I would shift out of the formal pastor mode and talk with them some about the White Sox and Cubs, about neighborhoods and Chicago politics. Somehow, the more I tried to be their friend, the stiffer our relationship grew.

Now it was ending.

I happened to know the pastor of the church they were transferring to, a man of tireless decorum. ...

Discipleship
Leader's Insight: The High Price of Dying (to Self)
Five questions for Dave Johnson about his "Job" season.
From the Leadership Interview, Spring 2007
Trending

Preaching
The State of Preaching
A look inside our fall special issue.
Kelli B. Trujillo 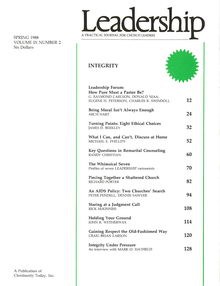 This article is from the Spring  1988 print issue of Leadership Journal. Subscribe to continue reading.