Pete, a friend who is an associate pastor, called me aside after the meeting. "John, do you have a few minutes to talk?" His question led to over an hour of discussion on the pros and cons of the associate pastorate. He was at a crossroads in his ministry and wanted to know, "Should I consider becoming a senior pastor?"

Later that month, following a gathering of pastors, another associate pastor told me that a church wanted him to candidate as senior pastor. "Is a senior pastorate really where the action is," he asked candidly, "or is the grass just greener on the other side of the fence?"

Having been on both sides of the senior/associate fence, I know this question is worth examining.

For over ten years I served two churches in associate roles. In Colorado I worked as a youth pastor under the direction of a sharp, CEO-type senior pastor. In Arizona I worked as a minister of education and associate pastor in a team relationship with a loving, general-practitioner senior pastor. As I developed ...

TOWARD BETTER BOARD RELATIONSHIPS
Quality interaction is the grease that keeps the wheels turning.
Charles R. Swindoll
Trending 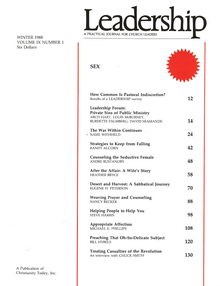