How can pastors and lay leaders work hand in hand when they don't always see eye to eye?

Misunderstandings and disagreements can grow between pastors and lay leaders at any time, but they seem to multiply in conditions such as these:

the resignation of a long-standing, greatly beloved leader

a severe illness in the pastor's family

a restructuring of the pastoral staff

the development of a building plan.

Such circumstances are precisely what Howard Clark and elder R. Judson "Jud" Carlberg have come through.

Howard Clark, since 1986, has served as senior pastor at Grace Chapel in Lexington, Massachusetts. Previously he led a church in Pacific Palisades, California.

Jud Carlberg is dean of the faculty at Gordon College in Wenham, Massachusetts, and chairman of Grace Chapel's overseeing elders.

Their working relationship was tested under national scrutiny when, shortly after Howard's coming, Grace Chapel's former pastor, Gordon MacDonald, confessed to marital infidelity. In the ... 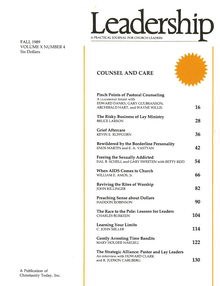