George Herbert (1593-1633) was an orator at Cambridge and was on the threshold of a career in Parliament when King James's death, followed by his own mother's passing, apparently prompted him to enter the ministry. Despite some sympathy for the Puritans, he chose to remain in the Church of England. In 1629 he became a parson at Bemerton, near Salisbury. Like his contemporary and mentor, John Donne, he wrote a number of best-selling poems. But he was also a caring and intentional shepherd of the Bemerton flock.

Herbert wrote The Country Parson, his description of a godly minister, for personal reasons-he wanted "a mark to aim at." He made every effort to live up to the image of the ideal parson that he had painted. It was published only after his death.

In it he explores the reasons for pastoral care. He would visit his parishioners not merely to be friendly but to minister. In this condensation, he explains his agenda.

The Country Parson takes occasion sometimes to visit in person, now one ...

Discipleship
A Life to Die For …
Sanctification, theologically and spiritually, is a matter of life and death (not necessarily in that order).
John Ortberg
Trending

Cover Story
Why There Are So Many ‘Miraculous’ Stories of Bibles Surviving Disaster
When Scripture makes it through flood or fire, we see signs of a faith that endures.
Maria Baer
Editor's Pick 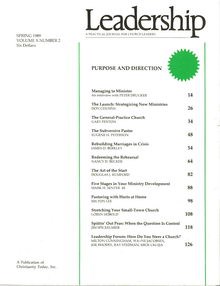