How churches can reach and retain the increasing number of seniors.
Win Arn and Charles Arn

While media and marketers were trumpeting the baby-boom generation, an entire wave of Americans moved into their 50s, 60s, and 70s. Today social scientists (and astute church leaders) are coming to see the vastness and significance of this overlooked and rapidly growing generation. For example, did you know that:

-There are more Americans 65 years of age and older than the entire population of Canada.

-The over-55 population is multiplying three times faster than the population at large.

-Life expectancy will increase from 75 years to 80 years within the decade.

-The U.S. is moving from a youth-oriented culture to a nation of middle-aged and older adults.

America, and the entire Western World, has found itself in the midst of what sociologists are calling an age wave. ... 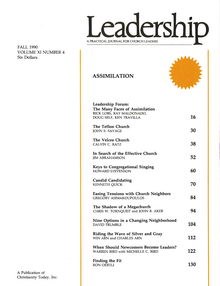