A deathbed contrast reveals the needs of the driven and self-absorbed people of today.
David Hansen

Harold's parents came from Norway around the turn of the century. They ended up farming in eastern Montana, where Harold was born. His parents were pious, peasant Christians-Lutherans, to be sure. They were not overly impressed with the "enlightened" wealthy classes of Norway.

Harold grew up working hard. Witnessing his parents' faith as they toiled to make a living in the harsh environs of the Montana highline, he embraced their faith with a full heart. Early in his adulthood, Harold stopped believing that God spoke Norwegian, but that's also about where his acceptance of modern thought halted.

He married a woman of German Baptist origins, and they decided to be Baptists. Wheat farming never suited Harold, and the Depression took their farm, so the family moved to western Montana, where Harold and his wife ranched.

They raised cattle and kids, in no particular order-they lovingly cared for all of them. The cattle, who were practically pets, always took top money at auctions. And the kids, ...

Tuesdays with Tozer–Simplicity
Seeking Christ in an age of complexity.
Margaret Feinberg
Trending 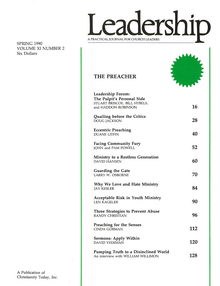 This article is from the Spring  1990 print issue of Leadership Journal. Subscribe to continue reading.