What the pastor can do to help.
Stephen Arterburn

I received a call from my pastor, requesting my help. He had spotted a young girl on a curb near the local high school. She was in tears and smelled more like a skid row bum than a 16-year-old from his church. He took her to his office, but he didn't know what to do next. He would have called her parents, but she begged him not to. I hurried over.

When I arrived I found an alert, petite girl, weighing approximately one hundred pounds. I asked her what had happened. She and two other friends had started drinking that morning around 8. She had consumed a pint of whiskey and half a bottle of vodka flavored with peppermint-all of this within four hours. For a girl of her size to consume that much alcohol in that short of time and continue to be alert meant only one thing: she was a full-blown adolescent alcoholic.

As I've worked with chemically addicted youth, I've discovered this is not an unusual scenario. When a drug or alcohol problem arises, people turn to a pastor more frequently than ...

Preaching
The Great Delivery Debate
3 preachers duke it out over the age-old question, “Manuscript, notes, or nothing?”
Jerry Andrews, Paul Atwater, and Rich Knight
Trending 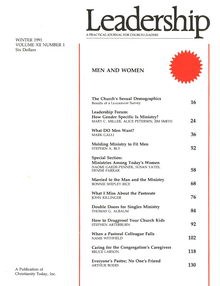 This article is from the Winter  1991 print issue of Leadership Journal. Subscribe to continue reading.