DO WE REALLY HAVE TO COMPETE WITH TV?

If, as John Stott says, effective preaching is building a bridge from today's culture to the Scriptures, then, arguably, one of the bridge pylons on the near side would be a television. For ill, for good, television molds Our culture like nothing else.

Television has molded communication. The average person in the pew, who grew up watching "The Andy Griffith Show," "The Tonight Show," and "Sesame Street," listens to a sermon differently than people did before television.

To get some insight into television's influence on both the content and the form of preaching, the LEADERSHIP editors sat down with three communicators:

Everett L. "Terry" Fullam, after serving as rector of Saint Paul's Episcopal Church, Darien, Connecticut for seventeen years, has been released to minister nationally and internationally. His latest book is Thirsting (Thomas Nelson, 1989).

Joel Nederhood is speaker for the radio broadcast "The Back to God Hour" as well as the television program "Faith 20."

END_OF_DOCUMENT_TOKEN_TO_BE_REPLACED
Already a subscriber? Log in
Read These Next

DO WE REALLY HAVE TO COMPETE WITH TV?

DO WE REALLY HAVE TO COMPETE WITH TV?
hide this 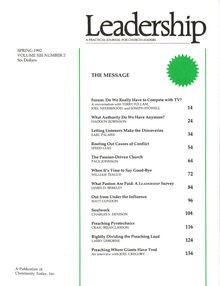 This article is from the Spring  1992 print issue of Leadership Journal. Subscribe to continue reading.