I pastor a large church started in the early 1980s. Several years ago the founding pastor abruptly resigned, disqualified (in the opinion of the elders) from ministry.

Like most pastors of fast-growing American churches, the founding pastor had a charismatic personality. People swarmed to his church, irresistibly drawn to his warmth, and the church began its meteoric rise. But one Sunday morning, when he stood up and essentially said, "It's been real, folks, but now I'm burned out. Good-bye." The congregation went into shock. The full story behind his departure was not publicized.

I arrived knowing about the turmoil that preceded my coming. But I wasn't prepared for what I found. I naively thought that becoming the senior pastor of a large church with a fourteen-year history was like becoming president of General Motors: I would take over the GM legacy, give it a few distinctives, and ride its momentum into the future. I fully expected its people would be committed to the ... 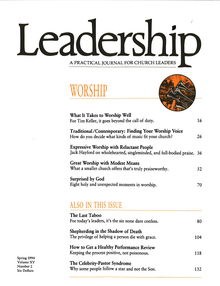 This article is from the Spring  1994 print issue of Leadership Journal. Subscribe to continue reading.