Most of us recognize small groups as vehicles of care and support. But do small groups contribute to a church's outreach and numerical growth?

Not necessarily. In fact, small groups often can inhibit growth in two ways.

First, by failing to seek out non-Christians. Most small groups, in fact, aren't open to non-Christians. As a result, they often divert considerable resources and energy away from evangelism. When small groups become the end rather than a means to the end, they distract a church from its disciple-making mission.

Second, by excluding new church attenders. In general, newcomers won't feel welcome in groups that have been together for over two years--which describes 90 percent of small groups in churches today. The relationships that mean so much to those in the group inadvertently keep outsiders out. To make matters worse, when newcomers are excluded from one group, they seldom try a second, and they usually wander away from the church.

So should existing groups be dissolved ... 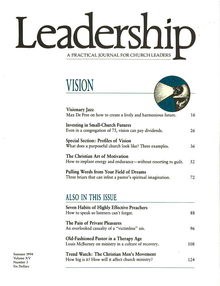