Strangely, I felt there was hope for healing the divisions in my city when I saw what didn't happen after Annie Ray Dixon was killed in the summer of 1992.

Annie Ray was an 84-year-old grandmother, a double amputee, and African-American. A botched drug raid went to the wrong house, and a white deputy busted through in Annie's bedroom door. Tragically, his gun went off and killed Mrs. Dixon as she lay in bed. The African-American community in Tyler, Texas, was outraged; the incident had the potential of blowing up the city.

I was about 200 miles away in Houston when Mrs. Dixon was killed. Some fellow members of a citizens' action group, Tyler Together, phoned me and asked if I could intervene and keep the peace.

Our first stop was the sheriff's office; he was considering limiting the investigation to his internal affairs department. But we convinced him that such a limited approach would only increase the outrage and fuel the rumors of cover-up. He wisely decided to forgo an internal investigation ...

From the Editor
Praying After 9/11
Marshall Shelley
Trending 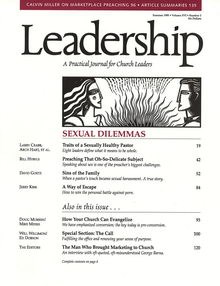