When I entered the pastorate, I had a good understanding of original sin.

Six months later, I had an excellent understanding of original sin.

I had arrived only a few weeks after the departure of the founding pastor. He was well-loved and had left on the best of terms to pursue a doctorate and a career in seminary teaching. We were just a small group meeting in a high school cafeteria, but I thought we had great potential. I was particularly impressed by the unity and quality of relationships I found. My call had been unanimous. It looked as if we were ready to roll.

There was just one problem.

I had failed to take into account the simple fact that when no one wants the previous pastor to leave, no one really wants the new one to come (no matter how unanimous the vote). I was, at best, their second choice. At worst (at least, whenever I tried to change something), I was a barbarian invader.

Needless to say, my honeymoon was short. People were literally leaving as fast as they came in. In a ... 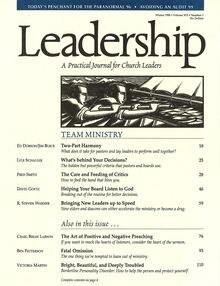