I remember when we had to set up seats in all the side rooms on Sunday mornings," the old man said. "We sometimes took two, even three offerings for missions in the morning service. Ah, those were the days."

We looked around at the sanctuary, now only a third full. The side rooms were cordoned off by cracking vinyl dividers. The room had the smell of emptiness.

So much had changed. In the last forty years, the city's social and economic composition had shifted. The young fathers and mothers of the glory years were now older and tired. Their grown children had moved to the suburbs.

"Jim, this church can have a significant ministry again," I said. "But we're going to have to adapt to the neighborhood we now live in."

His eyes revealed fear. Would "adapting" mean getting rid of everything familiar and precious to him? Would there still be a place for him and his wife and the pioneers who had founded the church?

Though my current church is healthy, over the years I've learned to identify the different ... 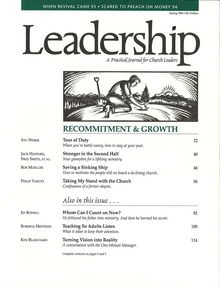 This article is from the Spring  1996 print issue of Leadership Journal. Subscribe to continue reading.