Scientists now say that a series of slits, not a giant gash, sank the Titanic.

The opulent, 900-foot cruise ship sank in 1912 on its first voyage, from England to New York. Fifteen hundred people died in the worst maritime disaster of the time.

The most widely held theory was that the ship hit an iceberg, which opened a huge gash in the side of the liner. But an international team of divers and scientists recently used sound waves to probe the wreckage, buried in the mud under two-and-a-half miles of water. Their discovery? The damage was surprisingly small. Instead of the huge gash, they found six relatively narrow slits across the six watertight holds.

Small damage, invisible to most, can sink not only a great ship but a great reputation.

Integrity is like virginity—once you lose it, it's gone for good. … No officer should ever be in a position where he or she fears the truth.

Join the conversation on Facebook
Tags:
EthicsFriendshipGenerosityIntegrityPreachingSinSuccessSuffering and Problem of Pain
From Issue:Fall 1997: Scripture & ApplicationOctober 1, 1997

The Death of a Preacher
David L. Goetz
Trending 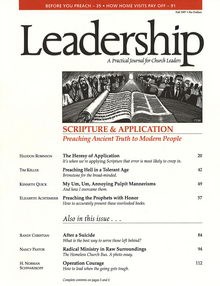 This article is from the Fall  1997 print issue of Leadership Journal. Subscribe to continue reading.