Walter Payton, the most successful running back ever, knows that everyone—even the very best—gets knocked down. The key to success is to get up and run again just as hard.

On the front seat of the stolen car sat a box of crackers that, unknown to the thief, were laced with poison. The car owner had intended to use the crackers as rat bait. Now the police and the owner of the VW Bug were ... 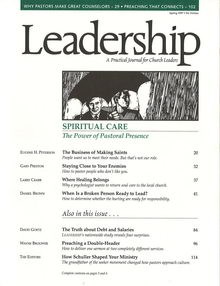 This article is from the Spring  1997 print issue of Leadership Journal. Subscribe to continue reading.