5 ways to limit conflict's impact on you.
Jock E. Ficken

As I hung up the telephone, I realized Jerry had done it to me again. This round lasted no more than five, maybe ten minutes, but my doubts lingered for days.

Jerry and his family were on-again-off-again worshipers. Of late, they were off again. I had called to express concern, to say they were missed. Jerry informed me that if I really cared, "You would have called a long time ago. And you wouldn't pay so much attention to the rich folks in the church. And you would care more about us in the church than the unchurched."

What conflict can do

Such conflict can negatively affect me:

The Theology of Multi-Ethnic Church (Cont.)
Diversity is an issue in the suburbs, not just the city.
An Out of Ur interview with Mark DeYmaz
Trending 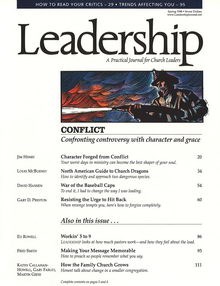 This article is from the Spring  1998 print issue of Leadership Journal. Subscribe to continue reading.