A major difference between Viet Nam and the Gulf War, says one writer, was the amount of military might hurled against the enemy. In Viet Nam the U. S. chose, apparently, to fight with one hand tied behind its back. After the Viet Nam fiasco, however, the generals who planned Desert Storm amassed enough firepower to guarantee victory.

In 2 Corinthians 10:3-6 Paul describes ministry in terms of war. The apostle mentions weapons that have divine power to demolish strongholds of sin. He aims to take every thought captive to Christ. Preaching is war, according to Paul—war on the evil that bludgeons our hearers. The gospel prevails when preachers follow the doctrine of overwhelming force.

At Lake Shore Assembly of God, I have pursued for several years the vision that we follow Christ together in community. Unfortunately, a few sermons a year challenging people to be more devoted to one another will not overcome the massive cultural forces, from television to the ethos of self-seeking, ... 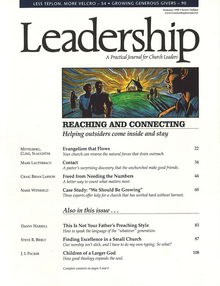 This article is from the Summer  1998 print issue of Leadership Journal. Subscribe to continue reading.