You Gotta Love That

In A Father for All Seasons, Bob Welch writes:

Last summer, my son Jason was a seventh-grader playing in a seventh/eighth-grade league. A fire-armed pitcher—more than a foot taller than my 4-foot-9 son—blazed a fastball right down the pike. Strike one. The second pitch scorched across the plate for a called strike two. The third pitch, unintentionally I'm sure, came right at Jason. He turned to avoid being hit and fell to the ground. His bat went flying. His helmet bounced off. The ball seemed to have skimmed his shoulder.

"Take your base," said the umpire.

Standing in the third-base coach's box, I was happy just seeing Jason alive, much less getting a free base.

Our fans were most likely thinking the same thing I was thinking: Take your base, son. You've been wounded, soldier; your war's over. You're going home …

"But honest, it didn't hit me," Jason pleaded. 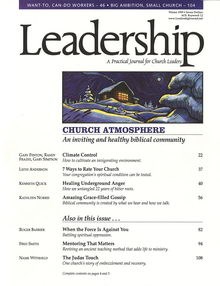 This article is from the Winter  1999 print issue of Leadership Journal. Subscribe to continue reading.