I was so offended I almost shook. I had never heard such language from the pulpit.

After our missions speaker illustrated Jesus' compassion for those who were untouchable, he became more intense as he called us to action. In a voice wrought with emotion, he described how the drought in Somalia decimated innocent people while a wealthy western church grew rich and lazy.

With tears welling in his eyes, he thundered that while we slept that night, 2,500 Somalian children would die of disease and starvation.

It was the next sentence that slapped me in the face. He punctuated each word with a pause.

I sat there stunned and almost sickened that the pulpit, a holy place, echoed such gutter language. Then I turned indignant. How could he know my compassion? How dare he?

A thick silence hung in the air. Then, leaning over the pulpit, he lowered his voice to a quiet, pitying tone.

"And do you know what the really sad thing ...

Ungrieving Grievances
Complaints to the board need not ruin its effectiveness.
Michael Baer
Trending 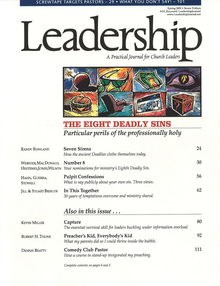