Our regular elders meeting was set for that evening, but after two police detectives visited my office in the morning, my news became our agenda.

"My son was charged today," I told the elders. "He was involved in the fire that burned down the children's wing of the church."

The men were as stunned as I was. I told them everything, and I felt from the expressions on their faces, from their tears and consoling gestures, that they supported me. After an hour, I had said all there was to say and left. The meeting, however, continued until midnight.

I took an induced 90-day leave of absence.

On Sunday, my wife, Marie, and I stood before the congregation and told them the news. So much had happened to us in recent years, there wasn't a lot of our tribulation the church didn't know. But the trials, and the pledge I made to myself to be open about them, had taken its toll on my ministry. I wasn't sure—after 22 years as senior pastor of Grace Baptist Church—that I would return from the unexpected time ... 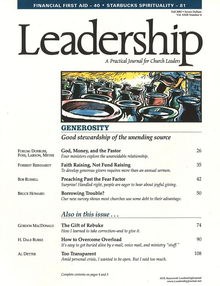 This article is from the Fall  2002 print issue of Leadership Journal. Subscribe to continue reading.