Hank had been a Christian for 50 years. By the time I came to pastor Hank's church, he was an old cranky guy. He had been a member there since he was a young cranky guy.

Hank complained about his family, he complained about his job, and one day, he began to complain about the church's music. He stopped people in the church lobby—visitors, strangers—and said, "Don't you think the music in this church is too loud?" We sat him down and told him he had to stop that. I figured that was the end of it.

Several weeks later, I got a visit from a man from OSHA, the government agency that oversees safety in workplaces. I wondered, Why is someone from OSHA here to see me?

He began explaining dangerous decibel levels at airports and rock concerts. Then I realized what had happened. Hank couldn't get satisfaction anywhere else, so he called OSHA to report that the church's music was too loud!

I started laughing. I apologized to the OSHA agent for making light of the situation, but it just struck me as silly. ...

Discipleship
Parents: Stop Praying for Your Kids
Before passing along this advice to parents in your ministry, please read this article.
David Staal
Trending 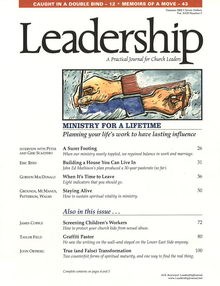 This article is from the Summer  2002 print issue of Leadership Journal. Subscribe to continue reading.