Opinions on God and Satan have changed since the attacks on the United States, even if church attendance has not, according to the latest research from George Barna.

More people think Satan is a real being following the attacks, especially women and older adults. In a summer poll, 3-in-10 said Satan was merely symbolic. Now only 2-in-10 deny his existence. Among adults of all ages, only 23% said Satan is not a living being, a five-point change.

If Satan is making a comeback, God took a slight hit (in the poll). Fewer men think God is "all—knowing and all—powerful," a decline of six points to 63%.

The number of people claiming to have made a "personal commitment to Jesus Christ that is still important in your life today" is unchanged at 68%. 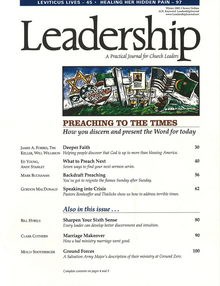