England's churches were reawakened by 1,100 young ministers, who learned their craft from an awkward, unpopular, and sometimes angry mentor.
Chris Armstrong

How did an awkward loner—unpopular in his youth for his affected manner—raise a generation of passionate ministers who changed a nation?

"Proud, imperious, fiery-tempered; a solitary individual, eager for friendship, whom others avoided because of his conceits, eccentricities, and barbed words." This is how Charles Simeon's biographer describes the great minister and mentor. Yet during his lifetime (1759-1836), he did more than any other to awaken churches in England. Over some 54 years, 1,100 young ministers sat with him on Sunday evenings, absorbing his passion for Christ, taking it to cold pulpits, and igniting parishes across the country.

He was an unlikely candidate to do so.

Simeon began his education at England's most celebrated public school, Eton, where he excelled at horsemanship and cricket. Although spirited and from a privileged family, Charles was not popular. He was not handsome. He had a bad temper. He tried too hard to gain friends. People tended to avoid him. ... 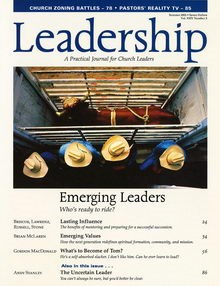