Mike was a troubled, homeless man with few friends. For several months he visited our church's food ministry, which served meals to more than 50 homeless people each weekday.

Mike wanted me to give him a ride to visit some relatives' graves at a nearby cemetery. In fact, Mike had asked me for the ride several times that summer, but I had been putting him off.

One afternoon I was about to leave for lunch when Mike asked again. Why don't I just get rid of this commitment now, so I can get on to other things? I thought. So we got into my car.

After we visited the gravesite, I asked Mike where he'd like to be dropped off. He named a rock quarry that was on the way back.

As I pulled over next to the quarry, Mike asked me to pray for him. I put the car in park, and then he asked, "Would you put your arm around my shoulder while we pray?" I'm accustomed to laying hands on those I pray for, so I put my hand on his shoulder and closed my eyes.

According to the doctors, it was a miracle I ever opened ...

Discipleship |Outreach
How to Spot Sexual Abuse in Your Church
Understanding the dynamics of sexual abuse is the first step.
Maureen Farrell Garcia
Trending 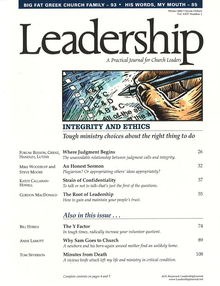