The breaking and healing of a pastor's marriage.
Matt and Julie Woodley

Eighteen months after our wedding day, we had our first child. One month later we started seminary, eagerly looking forward to a life of ministry.

Ten years later our marriage had degenerated from ministry dreams to marital nightmares. We were ministering to other married couples while our own marriage was a mess.

Although we never used the word divorce, we both knew our marriage was sinking. Like two drowning victims, we frantically fought each other, gasping for air, until it was almost too late. This is the story of what went wrong. But it's also the story of our surprising encounter with God's grace, which healed and restored our marriage.

p Julie: After four stressful years of seminary—agonizing with my husband through Greek and hermeneutics, scrounging for canned vegetables at the local food pantry, delivering two babies, working until 1:00 A.M. as a waitress—Matt finally graduated. We had the prize, and now life would get better, easier, and "normal."

The Quiet Strength of a Peaceful Leader
Why an unlikely trait has such powerful effects.
Gordon MacDonald
Trending 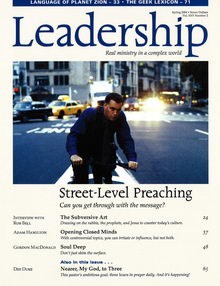 This article is from the Spring  2004 print issue of Leadership Journal. Subscribe to continue reading.