When I blow it, I let my church know it. And they respect me for it.
Dave Stone

When Stephen Brown came to be the pastor of a new church, the first few months he would routinely say in his sermons, "Now I am not perfect—I sin regularly." One of the members thanked him for his honesty and Brown replied, "Haven't the previous pastors made that admission?"

"Yes," the member said, "but you're the first one we've ever believed!"

A preacher may have an incredible reputation as a spiritual leader, but if there isn't a humble admission of weakness with it, that preacher will never connect with the audience. The apostle Paul knew this. Remember his transparency when he wrote that he was "the worst of sinners," or in Romans 7 when he chronicled his struggle between the good he wanted to do and that which he did. That may be why he added the disclaimer in 1 Corinthians 11:1: "Follow my example, as I follow the example of Christ" (emphasis mine). Paul's honesty concerning his vulnerability over his weaknesses isn't a turn off to me; rather it causes me to pay more attention because ... 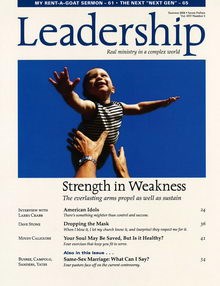