Christians have come a long way in finding creative ways to use even mainstream films to reach out. We've gone from boycotting Hollywood's objectionable fare (remember the picket lines when The Last Temptation of Christ released in 1988?) to making use of theological nonsense (The Da Vinci Code in 2006) as an outreach tool.

The thinking goes like this: If our unchurched friends will be talking about a movie at the watercooler on Monday, we should join the conversation, not simply bash the film while citing chapter and verse.

To carry on intelligent discussions about current films, and not just movies that are categorically "Christian" or merely "safe for the whole family," we need to watch, or at least learn about, what much of the world is watching.

That is not to say we should head to the megaplex for every R-rated slasher flick or sexually charged saga. We still need discernment. But it's good to pay attention to what others are discussing, and even to think ahead and anticipate which ...

Buying Power
Is there an alternative to consumerized Christian influence?
Adam Graber
Trending 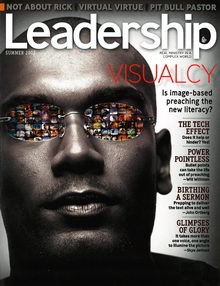 This article is from the Summer  2007 print issue of Leadership Journal. Subscribe to continue reading.