A (relatively) painless exam to determine if you're an emerging Christian.

In the introduction of their new book whose title says it all - Why We're Not Emergent: By Two Guys Who Should Be (Moody, 2008) - authors Kevin DeYoung and Ted Kluck offer yet another attempt at defining "emergent Christianity." I've included the full quotation below. Check it out and tell me whether you fit the bill.

After reading nearly five thousand pages of emerging-church literature, I have no doubt that the emerging church, while loosely defined and far from uniform, can be described and critiqued as a diverse, but recognizable, movement. You might be an emergent Christian:if you listen to U2, Moby, and Johnny Cash's Hurt (sometimes in church), use sermon illustrations from The Sopranos, drink lattes in the afternoon and Guinness in the evenings, and always use a Mac; if your reading list consists primarily of Stanley Hauerwas, Henri Nouwen, N. T. Wright, Stan Grenz, Dallas Willard, Brennan Manning, Jim Wallis, Frederick Buechner, David Bosch, John Howard Yoder, Wendell Berry, Nancy ... 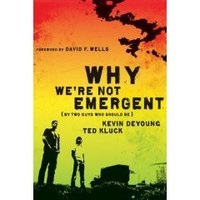