If your people won't follow, it may be the result of past abandonment.
Kenneth Quick

Since the fall of the Iron Curtain, several families I know have adopted children from Eastern Europe. As they grow, some of these children exhibit a set of extremely troubling symptoms: hostility, inability to form close relationships, and distrust of people, particularly authority figures. These children can become self-destructive, highly sensitive to rejection and anger, and blame everyone close to them for the problems in their lives.

Paradoxically, they often idealize their relationships initially and become preoccupied with them, so that they desire large amounts of contact and affection. However, break-ups are rapid, climactic, and destructive, and soon after one relationship ends, they begin to obsess about filling the vacuum with another. Psychologists call this syndrome Attachment Disorder (or AD).

In my consulting work, I interact with certain churches that exhibit the same sets of issues with love and authority as AD children. I call them Attachment Disorder churches.

Discipleship
I Discipled a Murderer
When people don't change, are our efforts in vain?
Carmille Akande
Trending 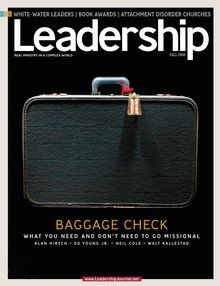 This article is from the Fall  2008 print issue of Leadership Journal. Subscribe to continue reading.