What is the role of real Christians in a virtual world?
Angie Ward

There is another life beyond this one: a realm where one's role on earth is a distant memory, where inhabitants have new bodies and can fly anywhere they like. It sounds a bit like heaven. But it's not. It's cyberspace.

Second Life is - well, for the uninitiated, it is hard to explain. Some call it a game, but in reality it is ultimate virtuality: a virtual, 3D, online world that is continually created and updated by its residents. Originally introduced to the public in 2003 by the company Linden Lab, Second Life now boasts over a million members from around the world.

These members, 50,000 or more of whom are online and "in-world" at any given time, create their own names and "avatars" (virtual identities with infinite combinations of customizable human and nonhuman "looks") that can own merchandise and property (bought with real U.S. dollars) and interact with any anyone else in-world via Second Life chat or instant messenger. Residents can walk, fly, or teleport to various destinations, ... 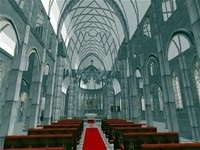