How should the church respond to Grand Theft Auto IV?

I have a confession to make: I'm a thief and a murderer. I haven't actually killed a living, breathing human being (I have stolen a thing or two, though; mostly pens and pencils). But one summer in college, a roommate and I played Grand Theft Auto: Vice City until we'd both done pretty much every awful thing there is in the world to do, including killing and stealing.

And it was great fun.

The newest installment of the Grand Theft Auto series is anticipated to be dang near the most lucrative media release ever. Take-Two Interactive Software, the company that owns GTA creator Rockstar Games, expects to sell 9 million copies of the game by the end of their fiscal year in October. They expect sales to gross $400 million in its first week; that's a measly $1 million less than the top grossing movie of all time, Pirates of the Caribbean: At World's End, made in its first week.

Together the series of three games has sold around 70 million copies so far, which puts it in competition with (and ...

Future Church
Hearing the Boom
Can churches offer more to the retiring seniors in our midst?
Pat Kase
Trending 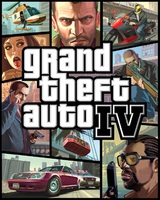